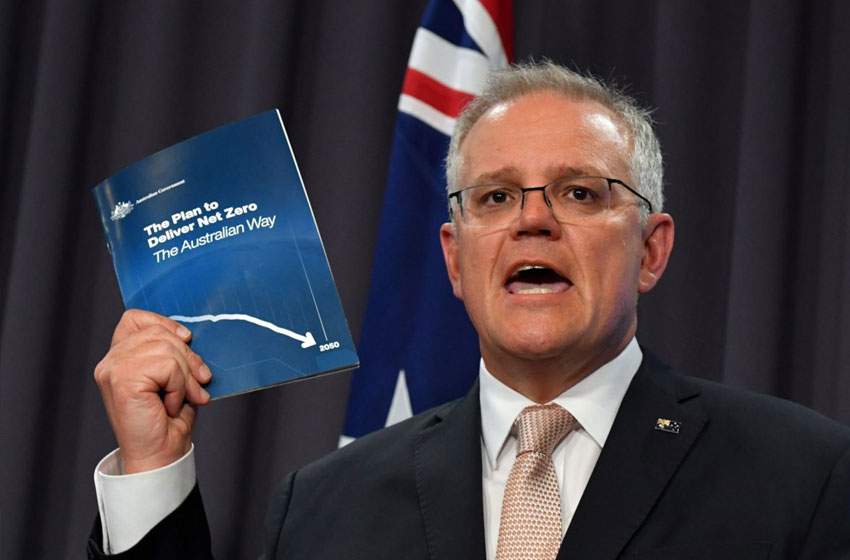 Scott Morrison, Prime Minister of Australia, has announced the plans for decarbonisation of the country through net-zero emissions by 2050. Simultaneously, he assured that the production or use of fossil fuels would not be stopped; he further emphasised that this project aims to combat the climate change that the world is facing currently.

This announcement comes merely a few days ahead of the UN climate summit scheduled to be held at Glasgow. However, it should be noted that Morrison persisted in his refusal to update the 2030 emissions reduction target, which was previously put forward in accordance with Paris Agreement.

Here are the few key takeaways of the policy :

The long-term emissions reduction plan is based on the existing policies; it is to be conducted with the help of a few principles. First, the target of zero emissions will be achieved through technology, not taxes; the cost of technologies will be brought down, making it feasible to provide a scenario where there will be reliable and affordable power.

One other change included in the plan is ultra-low-cost solar- an attempt to make it one of the dependable technologies. The government also intends to establish a carbon crediting scheme with partner countries in ‘’the Quad’’, which includes Japan, the US, and India.

Minister of Energy and Emissions Reduction, Angus Taylor mentioned that one of the crucial strategies includes ninety million hectares of productive agricultural land that will be utilised tactfully. It will be used as a carbon sink, carbon capture, and storage. In addition, cars and automobiles contribute considerably to the emission of most greenhouse gases; hence the manufacturing of low emission vehicles will also be given equal importance.

Mr Morrison pointed out that this project has the support of the Coalition partners; it will serve the national interest. The goal would be towards ‘’careful evolution’’ by ensuring that the plan does not negatively affect agriculture and farming.

Stark criticism soon ensued with the announcement of the PM; lack of clarity seemed to be one of the factors that seemed to be unanimous among most commentators. Australian Labor party MP Chris Bowen remarked that he had seen “more detailed fortune cookies than the document released by the government today”.

Regarding the plan, comparison with Saudi Arabia and Russia has been made, as both countries had unveiled similar campaigns to combat climate change. However, in reality, they lagged behind when it came to implementing plans of action that cause greenhouse emissions.

Despite facing disasters such as floods, drought, extreme rise in temperatures, bush, and wildfires, the government has been slow in terms of taking actions in terms of environmental concerns. According to Richard Black, a senior associate at the Energy & Climate Change Intelligence Unit, the project is framed in response to international pressure and demand. Offsets and carbon capture will play a significant role in the plan, but then again, there is no clarity in terms of the degree or extent to which government and businesses are required to pay for them.