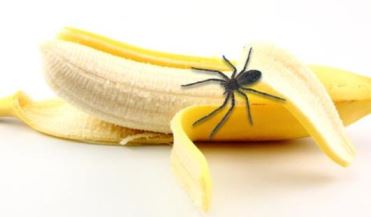 with spiders which they had bought from a local store. Jamie and Crystal Roberts abandoned their home with their two children when they saw spiders crawling at the bottom of the window.
The spiders are reckoned to be Brazilian wandering spiders, known to be the world’s deadliest spiders. Their poison is supposed to be 30 times more toxic than rattlesnakes. These spiders are considered to be the deadliest creatures on earth. Once bitten by them one can suffer vomiting, high blood pressure and ultimately death.
James saw the bananas covered with white patches which he had initially presumed to be of white mould. But when he took a closer look he found a spider nest overrun by hundreds of spiders. He immediately called pest controllers to take care of the situation and as per their instructions, evacuated his home with his wife and children.
Pest controllers disinfected the house and no one was allowed to enter for two days following which the family finally moved in.