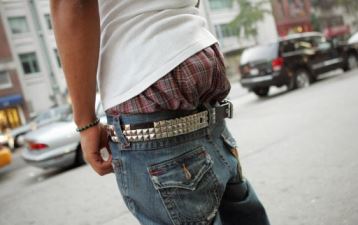 “Brothers should pull up their pants”, said Obama while he was addressing to the complaints of fellow Americans, concerned about the trend of sagging pants. In many regions of the United

States, pants or shorts that fall below three inches of the waist have been banned. Ironically, it is the US where this trend originated and spread across the world. Some like to believe that the trend of wearing pants or shorts below the acceptable level was given birth by prisoners in the US, as a sign to tell other inmates that they are available for sex. This is a major reason why many parents despise the sight of their teenage boys wearing sagging pants, worrying that it might send out the wrong signals. But is this the truth behind this bizarre albeit popular fashion fad?
Truth be told, this is not how it all started. Yes, it all began in the US prisons, not as a signal, but because of the lack of belts. That’s right! In prisons, the prisoners are made to wear the clothes of the previous inmates, irrespective of the waist size. Initially belts were a part of the uniform but then there were instances when sometimes belts were misused as strangulation objects and therefore it was removed from the jail wardrobe, resulting in loose pants. Same thing happened with shoe strings as well, which were also removed to avoid any incidents, completing the now popular ‘Gangsta’ look – loose denims and stringless shoes.
In the 1990s this look was made international by hip-hop artists and since then, it became a rage, mainly amongst the teenage boys. Ever since its popularity, sagging has been controversy-ridden, inviting fury from the moral police and parents who regard the popular style, indecent and lewd. But despite of severe and continuous criticism, the trend of baggy pants is still regarded as cool and comfortable, at least by those who do not mind flashing a good bit of their colourful underwear while walking. Just a quick question though, how you guys ever run?