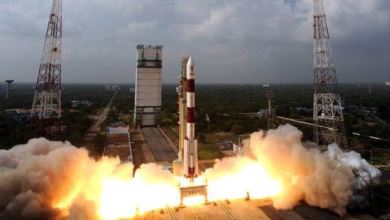 Finally after years and years of preparation, Indian launched its maiden Mars mission from Sriharikota on the afternoon of Tuesday. The rocket named Mangalyaan took off from the base and after a time window of 45 minutes, the premier phase of the Mars mission was announced as a success.
K Radhakrishnan, Chairman of Indian Space Research Organization (ISRO) appeared before the media and announced the preliminary stage of Mars Orbiter mission as a success when the rocket entered the Earth’s orbit after minutes. The space orbiter was launched from Satish Dhawan Space Centre in Sriharikota at 14:38 hrs after a minor drizzle raised concerns. The mission control centre was located 7km away from the launching site and the whole atmosphere was tense until Mangalyaan took off with the ambitions of Indian population with a deep roar followed by smoke and fire. After the launch, the orbiter disappeared amidst the clouds and emerged again after a span of a few seconds.
During the course of the launch, 58 of the eminent scientists of ISRO took charge of the whole computer system and closely monitored the performance of Mangalyaan through its respective stages one after another. The nail-biting stage came up when the rocket on entering the third stage disappeared upon which K Radhakrishnan explained that the rocket in its course enters a coasting phase for a period of 28 minutes out of which it stays in a total blind phase for 10 minutes. Soon, the ships deployed in the South region of Pacific Ocean picked up signals which the rocket was emitting and this brought a sense of relief to the scientists.