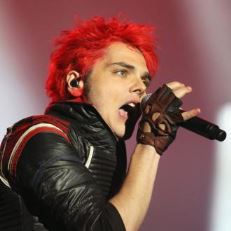 A recording of My Chemical Romance lead vocalist Gerard Way surfaced online and went viral over a course of a few hours. The song was apparently recorded by an avid fan of the singer while he was interviewing his own icon and Comic book prodigy Grant Morrison. Apparently Gerard Way was soo spellbound on meeting his own hero that he decided to sing a verse of his latest track exclusively for him. The recording was captured at the famous Sydney Opera House during his performance on October 5th,2013.
The lyrics of the song titled “Millions” was posted by Gerard way back in July after he tweeted, “I’m hoping next week I can tell you what I’m up to next, well, like part of it…”. But during that time, he kept his fans in the dark and everyone was oblivious regarding the date when Gerard would be releasing his song officially.
My Chemical Romance fell apart this year when the band members decided to part ways in March. Ever since the dissolution, Gerard Way has been working on his own album and since then, his fans have been eager to hear him out again. The song has already garnered thousands of hits in a few hours and will reach a million sooner or later. But as of now, it is still not known when Gerard Way will be officially releasing the song. The anticipation is because of the fact that this will be his first song since the dissolution of the band.