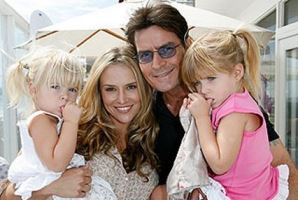 Charlie sheen has four year old twin boys, Bob and Max, with ex-wife Brooke Mueller who is currently having a problem with drug addiction, so Denise Richards, Charlie sheen’s earlier ex-wife took temporary custody of the boys, who also has the custody of two daughters of Charlie sheen. And we feel the world is twisted.
In May, Los Angeles County Department of Children and Family Services (DCFS) took the twins from Brook Mueller’s house forecasting danger due to her drug addiction problem. Denise Richard quoted at the time while taking the temporary custody “ They are family and they are Sam and Lola’s brothers.”
That was then and now the open arms of Richards have almost closed. She wrote a letter to the DCFS that she can’t handle the twin boys anymore because of the violent tactics towards her daughters and dogs. She explained how the kids go into a ‘zombie-like state’ and torture the dogs by kicking them on the head and pressing it tight, while they shriek in pain. The kids also teased, bit, strangled, kicked, slapped, punched and spat on her two daughters – again in the ‘zombie-like state’ except for biting because that would be ‘vampire-like state.’
Richard said that the boys need help and counselling as suggested by the paediatricians because of their violent behaviour and recurring nightmares which started after they visited their biological mother, but Mueller is not interested.
Whatever happens to the kids, the twitter mud slinging between Charlie and Mueller continues to entertain the world.