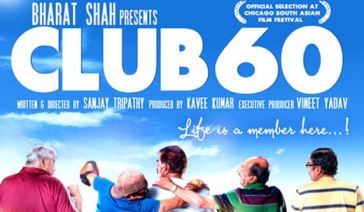 It’s a 2013 Hindi movie that was released on December 6, 2013 and it has acquired ratings of 6.7/10 on IMDB. It was directed and written by Sanjay Tripathy who has many other films on his credit. It didn’t cut the chase to other big movies released in the past 3 weeks but still successes to conquer such a high rating and almost positive reviews by viewers. Most of the cast is kind of old as it’s very obvious from the title but still this is above an average movie of this year and most of the credit goes to the cast of this film. It stars Farooq Shaikh, Sarika, Raghuvir Yadav, Satish Shah and Sharat Saxena.
The story of this film revolves around a tennis club, Club 60 and its members. The head of the group of these tennis players is Manu Bhai Shah who is 62 but still wears, speaks and behaves like an adult boy. He is very loud and funny in his conversations, always wears colorful shirts with inappropriate slogans for women and drives red colored open jeep. The story of this movie emphasizes on the behavior and talking style of these five above 60 men who play, fight and abuse others including teenagers and with their open talk about wine, sex and women, they put adults to shame in the public places. Story changes when an old couple moves to the same building who are from Pune and trying to grieve the death of their only son. Now it’s up to the five people of the group to prove that they are not just funny but there is something more to their individual stories and lives.