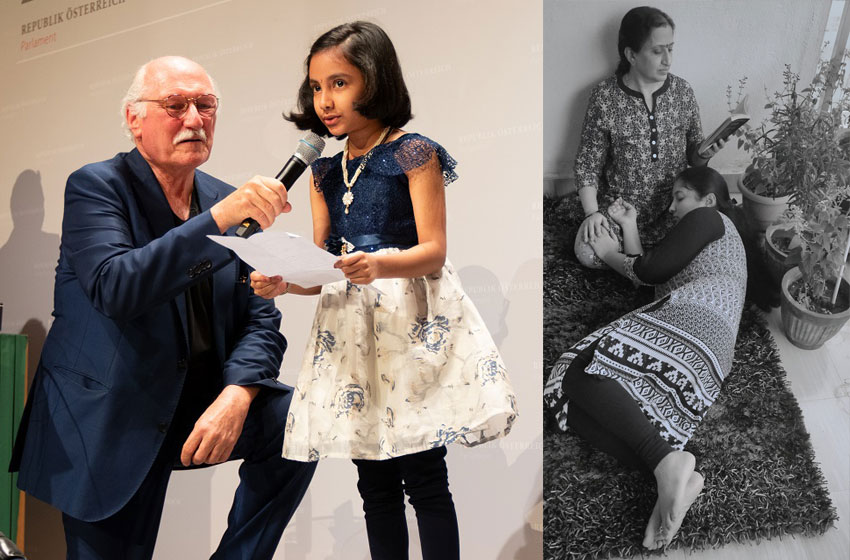 What were you doing when you were 7yrs old? Probably still doing things normal seven-year-old kids do. Meet little Aadhyaa Aravind Shankar, a seven-year-old from Bangalore who has clicked her way to international glory. A simple photo taken by this young sensation from her mother’s phone led her to become the first Indian ever to win the Children’s Peace Image of the Year-Global Peace Photo Award. Little Aadhyaa was bestowed with the award on World Peace Day at a ceremony hosted at the Austrian Parliament, Vienna. This achievement is no small feat because she is the first Indian to be awarded Peace Image of the Year, either in the child or adult category, while she also received a medal, a diploma and a check of 1,000 euros.

The picture captured by Aadhyaa shows her mother lying on her grandmother’s lap and has been aptly titled ‘The Lap of Peace’, alluding to the peaceful lap of Mother Nature. This one simple photograph captured the hearts of the award jury, who were mesmerised with the simplicity of a child’s imagination. At the ceremony, Aadhyaa gushed how honoured she felt to receive the award. She further elaborated that when she saw her mother sleeping peacefully in her grandmother’s lap, she immediately thought of her mother’s lap as the lap of nature.

Interestingly the Global Peace Photo Award is awarded every year by Lammerhuber Editions in collaboration with UNESCO and the Austrian Parliament. UNESCO states that in 2021 alone, 15,000 photographs were received by them, of which the maximum number of contributions came from Indians. This award recognises and honours photographers from across the world whose pictures echo with human efforts to promote world peace. And this year Aadhyaa, a seven year old genius, has made India proud!