On 31st October, India witnesses the unveiling of the world’s tallest statue in its very own Gujarat. The process of construction has cost the government millions of dollars. However, the public reaction has not all been positive as local farmers cannot come to terms with the government’s decision to spend such a large amount of money on the statue while they are so weak financially.
Farmers in Gujarat have long struggled to access clean water which can be used to irrigate farmland. They depend on monsoon rain for watering their crops or use groundwater. However, India often has long dry summers which can be taxing for these farmers. 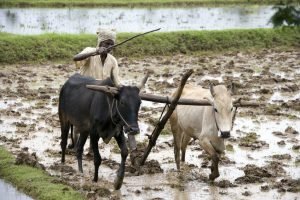 When the Gujarat state government began constructing the giant 600 ft tall statue, farmers began to offer their services to earn some extra money. The statue is meant to be a tribute to Indian independence leader, Sardar Vallabhbhai Patel. Made in bronze, it cost around 29.9bn rupees to make. If reports are to be believed, the state government of Gujarat paid over half the sum, while the rest was paid by the federal government or through public donations.
Farmers in Gujarat are of the opinion that the government could have used this money to make life easier for them instead of spending it on the statue. Considering that a large part of rural Gujarat still does not have basic irrigation facilities, it is not difficult to see where they are coming from. The statue is complete now, but farmers aren’t happy about it. 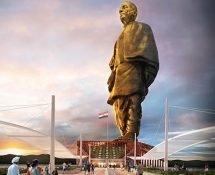 Known as the “Statue of Unity”, it gives homage to Patel who was India’s deputy prime minister under Jawaharlal Nehru. He was an able nationalist leader, hailing from Gujarat, who made significant contributions to the Indian Independence Movement. The Prime Minister of India, Narendra Modi, commissioned this memorial in 2010. The plan consists of a three-star hotel and a museum along with a research centre which will be devoted to subjects close to Patel’s heart.
Rural districts in Gujarat still suffer from problems like hunger and malnourishment, and that has led many to question this move. However, the government opines that the statue will improve Gujarat’s economy in the long run which will be beneficial for its residents and farmers. The statue is expected to bring in more than 2 million tourists annually, and that will lead to more employment opportunities for the local people.

Farmers and residents are still not convinced. They question why the government could not organise a massive project like this when it came to helping them out and improving the overall standard of living in the villages. The request for reliable water supply has repeatedly fallen on deaf ears, but officials assure that they are trying to make it happen. With the state of affairs not improving, farmers have resorted to stealing water because they do not have the official permission to divert a dam or canal.
It is yet to be seen how the government goes about reducing the farmers’ woes.
.