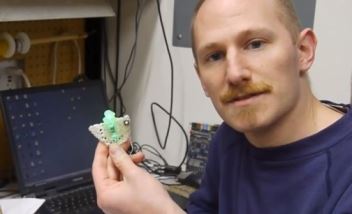 The prospects of Steam Boxes will be large in the future and some of the gaming hardware manufacturers such as Valve are already experimenting new as well as innovative ways of gaming. The joystick-less Steam controller has been in the news for sometime but the latest from Valve comes as a surprise to all gamers.
Ben Krasnow has been an integral part of Valve’s design team and has come up with a weird form of game controller that involves the tongue as well as butt. The videos of both of the aforementioned controllers has been uploaded on the YouTube channel of Valve but Ben still cannot ascertain as to whether he will be able to produce the final product or not. Krasnow explains that in order to develop the tongue controller, he mashed the bottom part of an infrared mouse with the retainer of a mouthpiece. Through this concept, you can slide your tongue and it will act as the cursor. On the other hand, he explains that the Butt controller is basically a mash-up of a bathroom scale and X-Box 360 controller.
Even if the idea is totally vague, yet Ben Krasnow feels that he can give it a shot after a lot of research. No one has ever thought of designing software with body parts as the foundation. As of now, the use of these innovative gadgets has not yet been finalized but still, Ben Krasnow believes that thinking out of the box is certainly going to lead us to innovative inventions.