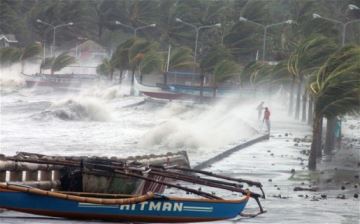 “Haiyan”   The most powerful typhoon this year, and possibly the strongest ever to hit land, has smacked into coastal regions of the Philippines. In particular, communities on the central island of Samar, some 650 km (405 miles) southeast of the capital Manila, were badly hit After battering the southern tip of Samar island, the storm hit nearby Leyte island  and was reported  a wallop. Weather experts say to expect “catastrophic damage”. All roads are impassable due to fallen trees. As the typhoon made landfall in Philippines, more than 700,000 people have been evacuated from towns and villages in the storms path, according to the National Disaster Risk Reduction and Management Council. Hundreds of domestic and international flights have also been suspended.
[divider] [/divider]
Three people were killed and seven injured, national disaster agency spokesman Rey Balido said during a press conference at Manila’s main army base. The US Navy’s Joint Typhoon Warning Centre recorded winds of up to 314 km/hr and gusts of up to 379 km/hr. A storm gains super typhoon status when winds reach speeds in excess of 240 km/hr. President Benigno Aquino in a televised address on Thursday, just hours before the storm made landfall, said “we can minimize the effects of this typhoon if we help each other. Let us remain calm, especially in buying our primary needs, and in moving to safer places.” The typhoon is expected to move through the central Philippines region on Friday and Saturday, before moving toward the South China Sea over the weekend, when it is anticipated to head toward Vietnam.