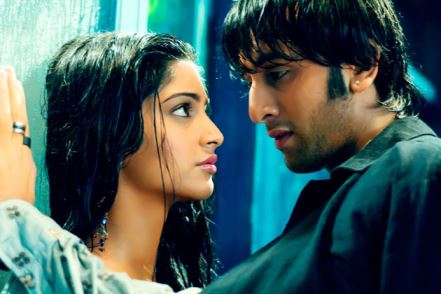 It must not be much fun being Sonam Kapoor, and much less being around her. If there is one Bollywood personality (I first typed ‘star’ and then ‘actress’ but deleted both words because she’s neither) that can safely be diagnosed with ‘both-feet-firmly-in-mouth’ disease, it is this ditzy daughter of Anil Kapoor.
There is such wealth of material with regards to Sonam’s many ‘oops’ moments that a writer feels spoiled. Here’s a quick, randomly selected sample: when promoting her 2012 movie, Players, she made it a point to display her middle finger to the crowd and proclaim it ‘part of today’s youth’. Um, no, Sonam, a middle finger has got nothing to do with youth. Old people have one too. They just don’t go around showing it to cameras.
She called Aishwarya Rai ‘aunty’ after having replaced her as endorser of a high-end cosmetic brand. She made enemies with Abhay Deol after the latter expressed disappointment that their movie ‘Aisha’ had more money set aside for Sonam’s wardrobe than for the script. She said, on an earlier episode of Koffee with Karan, that Shobha De ‘writes bad books’. In short, she has made a habit of taking cute (in her world) pot-shots at professionals who are more experienced and more successful than she is.
If among us there were some who were harbouring hopes that the diva would have grown up in the last year or so, they were cruelly dashed on the now infamous episode of this year’s Koffee with Karan where she appeared with her father. There were enough ‘eek’ moments in this one hour of Sonam-speak that obliterated all her previous prattling.
To begin with, Sonam indulged in a game of comparisons in which she informed us that she was just like Audrey Hepburn, Meena Kumari and Rekha. What? You say you don’t see the similarity? There must be something wrong with you. Do you not know that all of these great actresses were also fashion icons, just like our dear Sonam? Now you may say that Sonam, unlike the others, doesn’t have an acting career to speak of, but if you do, she will just all you ugly to your face.
Don’t think she’s not above such insults. In probably the most bizarre statement of the year, Sonam declared that in order to be known as a good actor in the industry, you have to be bad looking. Now that statement is wrong on so many levels that we can do a complete article on it alone. So we’ll just allow it to sink in, observe a two-minute silence, and move on.
Just as we thought we’d heard the last of it, she came up with a few more. ‘I never get bad reviews,’ she said, ignoring the many she got for duds – sorry, movies – such as Mausam and the afore-mentioned Players. And for good measure, she said that it was awesome how she has become an ‘icon’ in her twenties when mostly people in their forties or people who are dead become icons. Her words, not ours. Even Karan Johar leaned in at this point and said to Anil Kapoor, ‘She just called herself an icon.’
Now we’re not professional psychologists or anything, but we believe no one can be this dumb. We feel Sonam’s fashionista image and obnoxious behaviour towards everything and everyone are probably masks to a character plagued by low self-esteem and envy. We heard that for much of her teenage life, Sonam was overweight to the point of being obese. Maybe this is all her way of getting even with the world.
Who knows? But Farhan Akhtar said it best when asked to describe her with a marketing caption. He said, ‘Now with unlimited talk time.’
We couldn’t agree more.