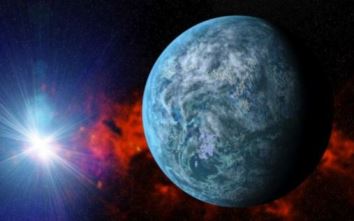 According to new research, ‘Super Earths’ or planets which are bigger in size than our mother Earth are unlikely to be habitable for humans and also other known life forms, the reason being that their crushing atmosphere will prove fatal to the existence of life. This new research has destroyed any possibility of the existence of life on planets similar to Saturn, Neptune etc.

The underlying cause for such hydrogen filled crushing atmospheres is the enormous gravitational force on such planets thus leading to larger atmospheric pressures. If the size of a planet is too small then it may not have sufficient gravitational force to sustain its atmosphere and if it is too big, then the atmospheric pressure would be too large thus rendering existence of life unfeasible. Therefore, there is a desirable perfect size range for planets to host life.
According to the research of Lammer and fellow researchers, the perfect size range for sustenance of life forms is between 0.5 to 1.5 times the Earth’s weight. The underlying research for this has been software modelling to determine how planets in the ideal size range latch onto their atmospheres. Planets with half of Earth’s weight but similar density were found to be unable to maintain their atmospheres while planets bigger than Earth were found to do so thus explaining the reason for their highly pressurised atmospheres. The planets in the ideal size range would have just about the right amount of hydrogen in their atmospheres to shield us from the host star’s ultra-violet rays, which can possibly dismantle extremely important gases such as oxygen and nitrogen.
Nowadays, astronomers are researching ‘goldilocks’ or the habitable areas around stars since the climatic conditions in such areas are just about right for the existence of liquid water on the surface. Around 715 planets travelling around 305 stars have been found during the past 20 years according to data obtained from NASA. About 95% of them have been found to be bigger than Earth. But there is nothing to be worried about since, the number of possibly habitable planets are potentially in billions.