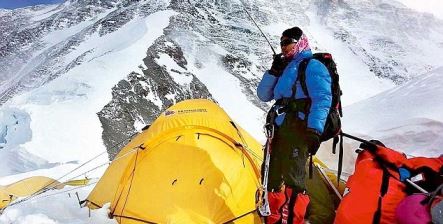 Malavath Poorna, a thirteen-year-old daughter of a tribal farm labourer, created a new record by becoming the youngest female to reach the summit of Mount Everest, humankind’s favourite peak. Along with 16-year-old friend S.Anand Kumar, Poorna climbed the mountain accompanied by ten other Nepalese guides and hoisted the national flag at the top. They climbed up from the Tibetan side only to descend two days later and return safely to the north base camp in Tibet, amid much jubilation.

The feat did not go unnoticed even by the new tech-savvy Prime Minster of India, Narendra Modi, who tweeted (most likely through his PR team): ‘Was very happy to read this. Congrats to our youngsters. They make us truly proud.’

Most climbers approach the peak from the Nepalese side – because it’s easier – but the catch is that the authorities in Kathmandu don’t issue climbing licenses to anyone under the age of 16. So Poorna and Anand had to choose the Tibetan side for their climb. This achievement comes close on the heels of an avalanche that killed sixteen Nepalese guides on Everest last month, prompting a shutdown of access to the peak from Nepal.

The Everest has long been a symbol of achievement, courage and resilience ever since Tenzing Norgay and Edmund Hillary scaled it in 1953. Since then, more than three hundred people have lost their lives in attempts to tame it. For a thirteen-year-old to perform this feat is no small matter, and Poorna will be a fitting role model, we think, for the next generation of climbers who wish to hoist a flag on the coveted peak.