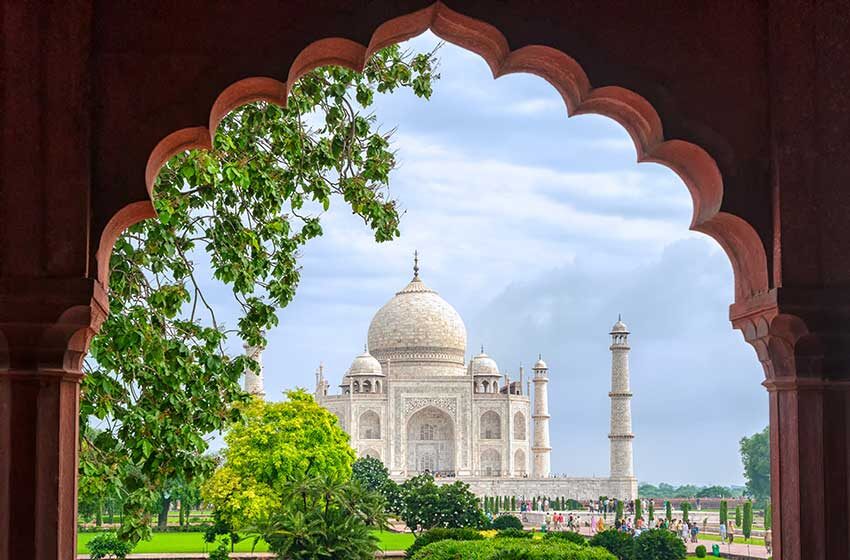 Taj Mahal is one of the seven wonders of the world and an excellent example of Mughal architecture that combines Ottoman, Turkish, and Indian architecture elements. Mughal emperor Shah Jahan commissioned the construction in 1632, and it took twenty-two years to complete it. The structure is an ivory-white mausoleum situated on the right bank of the river Yamuna in Agra.

Emperor Shah Jahan built the Taj Mahal to commemorate his late wife, Mumtaz Mahal; UNESCO designated it as a World Heritage Site in 1983 for being “the jewel of Muslim art in India and one of the universally admired masterpieces of the world’s heritage”. The monument is remarkable for the intricate stone and marble work that decorates the minarets and the whole mausoleum.

Renowned Indian Poet and writer Rabindranath Tagore described the historical monument as” a teardrop on the cheek of time”, alluding to grief, power, and wealth fading away. Still, the Taj Mahal will stand the test of time as a symbol of Shah Jahan’s love for his Begum (Queen). Moreover, it is an architectural marvel that attracts thousands of tourists every year; hence, it is no surprise that we can find a few replicas around the world.

Let us take a look at a few Taj Mahal replicas around the world:

China is renowned for remaking things thanks to advancements in its technology and engineering. Located in the Window to the World theme park in Shenzhen, the Chinese Taj Mahal is a miniature replica. The theme park also has replicas of other famous monuments from across the world, for instance, the Leaning Tower of Pisa and the Eiffel Tower.

The Royal Pavillion, also called the Brighton Pavillion, is a former royal residence located in Brighton, England. It was built as a seaside retreat for George, Prince of Wales, who became the prince Regent in 1811. Furthermore, the structure was inspired by the 19th-century Indo-Saracenic style; hence it resembles the Taj Mahal.

During the First World War, the pavilion and other sites in Brighton came to be used as a military hospital, wherein sick and wounded soldiers from the Indian Army were treated.

Dubai is synonymous with opulence and splendour, and having a Taj Mahal of its own would be like cheery on the cake. Taj Arabia is a massive $1 billion Taj Mahal replica that is slated to be a part of the 400-hectare Falcon City of Wonders Project, a residential, tourism, and recreation destination
It will also include the replicas of Pyramids, the Hanging Gardens of Babylon, the Eiffel Tower, the Great Wall of China, and the Leaning Tower of Pisa.

In addition, the Taj Arabia is touted to be a wedding destination that will include a shopping centre, a 300-room five-star hotel, serviced apartments, and bridal wear stores.

The Taj Mahal of Bangladesh

The Taj Mahal Bangladesh is located east of Bangladesh’s capital, Dhaka, in Sonargaon. Film-maker Ahsan Ullah Moni announced the project’s construction after he returned from visiting the original Taj Mahal. He was so captivated by the structure’s beauty that he hired a group of architects and sent them to measure it.

He wanted Bangladeshis to see the Taj Mahal in their country who are unable to travel to India because it is expensive.

Technically, Humayun’s Tomb is not a copy of the Taj Mahal as the former is older than the latter. However, Humayun’s chief consort, Empress Bega Begum, commissioned the tomb’s construction on the banks of the Yamuna River. It is the first garden-tomb in the Indian subcontinent and also the first structure to use red sandstone on such a massive scale.

Apart from housing the grave of Emperor Humayun, it also includes the graves of Begam Begum, Dara Shikoh, great-great-grandson of Humayun and several other subsequent Mughals.

Vineyard entrepreneur Bill Harlan was highly inspired after his trip to India in the mid-1970s, so when we returned, he decided to create a replica of the Taj Mahal. He began building a miniature version of the structure on a boat. According to reports, one of his primary inspirations was the boats he saw in one of his visits to the Dal Lake in Kashmir.

Bibi Ka Maqbara is a tomb located in Aurangabad, commissioned by the Mughal Emperor in 1660 to commemorate his late wife, Dilras Banu Begum. The structure resembles the Taj Mahal; Entry to the mausoleum is through the main entrance gate on its south, which has foliage designs on a brass plate on wood covering from the exterior. A small tank is provided after passing through the entrance, and a low-profile screen wall leads to the main structure. The screened pathway has a series of fountains at its centre.