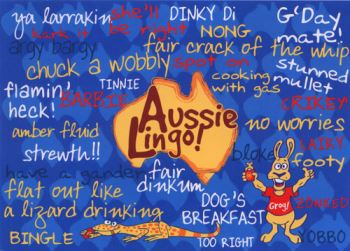 Karthik had always heard about the world Down Under. For him, born in a small village in Southern India, a job secondment to Australia was by far, the biggest change in his life. Working in the northern countryside, finishing off the Friday, he entered the nearest drinking hole.
Passing by the noisy crowd he parked himself at the bar top. Before he could detach his eyes from the bar patrons around him, he heard a bang.
“G’day Mate! You all right there?”
The barman’s words didn’t really register with Karthik but he responded with the obvious answer, “Errmm, Hi! Can I get a beer please.”
Sipping the pint of VB, he observed a group of men in fluoro vests on the other side of the bar who were loud enough to be overheard.
“Banjo! it’s my shout!” All the empty beer mugs thudded on the table at once.
“F#@k me dead! Look who’s comin’ in.”
“Crikey Moses! She is s#!t hot!”
“Hey hey! That’s my Sheila f#@kwits!”
She turned to the guy who seemed to be her boyfriend.
“See ya ‘morro at 9. Dare yaforget!” The couple kissed and the ladies left.
Voices echoed – “Ooh! Someone’s having a naughty!”
The guy erupted – “You f#@kin’ c#@ts!”
Voices echoed again – “A’ite then, I’m gonna shake hands with me best mate too.”
Half of the group dispersed to the restroom. Karthik emptied half of his pint in one big gulp and thought to himself – “What just hit my ears?” – A conversation that included as many swear words as the sentences spoken. Even surprising, the words came out of men and women with equal intensity, and none of them were fighting. After living a few moments in disbelief he walked out of the bar thinking to himself – “Maybe it’s just the bars.” In the years to come, he realised that the local pub was just a glimpse of the ‘colourful’ canvas that is Australia, shades of which can easily offend the boldest of the beholders.
Karthik’s story is not unique.
Having lived for a decade along the shores and deserts of the Land of Oz, he smiles to himself and admits – “It’s just the Aussie bite.” It may be that every second conversation around him would have to be beeped out on telly back in his country but that’s how casual talk is formed in this part of the world. The words may come hard at you but they are seldom meant to offend you. That’s just some good old Aussie mannerisms.
As it turns out to be, it’s not just the bars in Australia that echo with the globally-forbidden words. Mx reported that last year, a security guard was sacked by his employer for misbehaving with his manager. He reportedly complained about the ‘f#@king roster’ and told his manager to get ’f#@ked’. We all have love/hate relationships with our managers, but the helping verbs used in venting out the frustration at workplace were unthinkable to say the least. Fair Work Australia ordered the reinstatement of the employee, saying that his workplace is one in which bad language is commonly used and the swearing was not overheard by other employees. How many of us wish we worked at such a place?
If you think that people drinking in bars and security guards using foul language is a no biggie, then be ready to be surprised. Back in March 2009, Australian Prime Minister Kevin Rudd swore on Channel Seven. His arguably scripted words “s#!t storm” took the whole world by storm. In the year 2006, Tourism Australia launched a campaign – “Where The Bloody Hell Are You?” Those words did lead to some raised eyebrows in the UK, US and most of the English speaking world. However, all publicity is good publicity!
Now Karthik knows why Aussie cricketers always knock their opponents out with their verbal cannons. Whether it was Glenn McGrath owning Ramnaresh Sarwan in Antigua or Ricky’s boys crossing swords with the Indians in Sydney, Aussies always stood out when it came to attitude and aggression. And no, they aren’t trained to deliver sledging either, it’s only natural.
It’s in the blood, it’s in the air, You’re an Aussie, you’ve got to swear.
If one tries to break out of the box of orthodoxy and communicate with the Australian people, rest assured, they will have one hell of a conversation.
Freedom of speech is not often appreciated, especially that of Australian speech. In a historic decision, the state of Victoria tried to introduce a law that fines anyone who swears in public a hefty 238.40. “Bugger me!” – That’s how Banjo from the local pub would have reacted to the shocking news. The laws may come and go but the legacy of swearing in Australia is here to stay. The world may remain sceptical of us, but only till they experience the love, care and connection that binds us together. That’s the Australian way.
So, if you bump into someone while partying high in Amsterdam and get, “Eat sh!t and die, you w#nker,” you know that Ernie from Frankston will give you a big fat hug when you say – “No worries mate!”