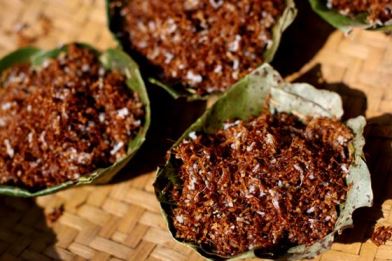 Food is one of the foundations of culture. The human cultural evolution has been so deep and wide that our food habits can sometimes seem downright bizarre to others. In this article, we look at a list of ten bizarre foods eaten in India.

What’s weird for one is habit for another. If there’s one thing that sets apart the human species from all others, it is the mind-boggling cultural diversity that we exhibit in various places in the world. And as we know, food is one of the basic components of culture, and sometimes, our eating habits may appear strange or bizarre to others.

Here is a list of ten bizarre foods that people eat in India.

Also called magic rice because of its tendency to magically turn purple when cooked, black rice is found in the North-eastern state of Manipur. It is found only in India and China. Sometimes you can find it on the dinner plates in places such as Kerala and parts of Sikkim as well.

Some would say that there is no pity for sharks because they’re the most powerful natural predator of the great seas. But our hearts still go out to the babies. In Goa, baby shark curry is a delicacy, and they are caught and cooked just like any other fish. It’s considered exotic, and is often much more expensive than a regular fish dish.

The silkworm, when it starts to make a cocoon of silk around it, is boiled in hot water so that we can obtain the silk. The dead pupa is then used to season the dish, which is a staple in the north-eastern state of Assam. They call it Eri Polu, after the eri silkworm.

The tribal areas of Chattisgarh love to eat red ants and their eggs served up as chutney or a dip. The ants are first dried, and then several spices and sweeteners are added to the mix to give it the authentic taste. The dip is called chaprah and is spicy enough to burn your tongue. Just like an ant bite.

This is an exotic dish in Sikkim and is believed to have medicinal benefits like curing stomach-related illnesses. It is also liked for its good taste. The dish is famous also in Goa, where people call it the ‘jumping chicken’.

This is a big taboo in India and most of the other parts of the world. It almost feels like cannibalism. But for the people of Nagaland and many parts of Mizoram and Manipur, dog meat is not just eaten but also relished. Dog meat is more expensive than other meats and is considered a delicacy.

This dish, called Jadoh, looks a lot like a regular pulao, but it is very different ingredient-wise. It contains chicken blood and pig intestines. It is cooked and eaten by the jaintia tribe of North-East India.

Yes, you read that right. Potatoes are deliberately not harvested when they’re ripe and are left untouched until they rot. These rotten potatoes are then either eaten in their natural form or cooked with spices. This is a common delicacy in many parts of North Eastern India.

This is tea made not with milk but with butter. It was originally introduced in India by Tibetan refugees. This tea is made with yak butter and a pinch of salt.

A delicacy of Meghalaya, called Doh Khlieh is a pork dish which is garnished with steamed pig’s brain.