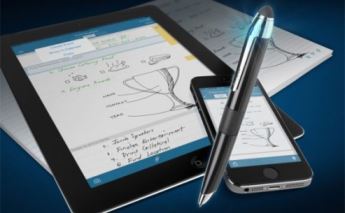 The latest innovation from smart pens manufacturer Livescribe is said to be tightly based on the iOS platform. This is the third version of the series and the features are quite appealing. But there are certain downsides to this latest offering which will be highlighted here by us.
One of the most revered benefits of using a Livescribe smart pen is the fact that you can record and write at the same time and then hear out the recording. Such a feature is certainly valuable to a journalist. Livescribe 3 is just a day old in the market as it was released yesterday and is powered by iOS 7 app. This time, the recording part will be taking place in your tablet or phone instead of the pen. All you have to do is ring the phone and it will start recording upon your command. Thus, this is where the downside comes into limelight. Unlike the previous models, you will need to carry a separate device powered by iOS in order to record and it will be mandatory for you to carry a notepad. This feature is certainly acceptable to those who have a penchant for writing on paper instead of tapping on a wide screen.
Presently, Livescribe will be releasing two models out of which one will be the basic edition consisting of a notebook having 50 pages at the price of $199.95 whereas the other one will be a pro edition which will be having a leather portfolio along with a 100-page notebook, a charging cable and a subscription of 12 months from Evernote Premium.