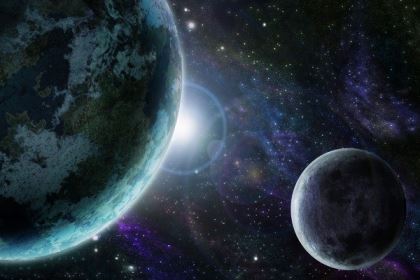 The world has moved on from space shuttle launches, and NASA’s every little move is no longer scrutinised on front pages of newspapers. But thanks to Chris Hadfield, whose guitar song from space went viral, interest in space and NASA has picked up again. We’re not as obsessed about it as we are about – say – the next big celebrity sex scandal – but we’re not blind to it either.
Today we bring you a list of some of the discoveries we made (both about the universe about our own planet) via our space launches.

If the scientists are to be believed, and if these things

were actually visible to the naked eye, they would look like giant sausages. About nine billion miles out into space from the Earth’s surface, magnetic one-million-mile-wide fields are – quite literally – bubbling away. They’re calling this area the Heliosheath, and while it was thought at first to be just vacuum, now scientists are all abuzz about how to study this proliferation of magnets and how to use them for space journeys that we may take in the future. Where there is magnetism, there is energy to be tapped into; now it’s just a matter of figuring out what to do with it all.

When we were growing up, the solar system was made of nine planets and the Sun. But now, recent discoveries are testing that theory. The latest entrant in the list of heavenly bodies comes in the form of Eris and its moon, Dysnomia, which lies a bit further out from Pluto. (In ‘space’ terms, ‘a bit’ means ‘a lot’.) Debate has raged in astronomical circles whether or not it should be called a planet, but now we seem to be going the other way and stripping Pluto of her planetary status. Soon we will have textbooks name only eight planets in the solar system. By the new definition of a planet, a heavenly body has to dominate its orbit enough to be able to clear objects out of its path. Pluto isn’t, so out it goes.

Mars has always been the favourite of science fi

ction authors and astronomers. The reason is that Mars is similar to Earth in mass and size, not to mention the fact that it is right next to us, so we think that if life could exist anywhere else in the universe, perhaps Mars is as good a planet as any. Time-lapse shots of the planet’s surface have yielded much evidence that there was once water on it, and in 2011 we went a bit further and discovered runes that suggest that some water may still exist even today.

The story here begins in 1995, when scientists began to track fleet-footed star called S2, which seemed to run along a speedy orbit around a compact, invisible, massive object that wasn’t visible. In 2008, after much data mining and theorising, it was confirmed that the object of S2’s attention is indeed a huge black hole (named Sagittarius A) that sits in the middle of the Milky Way, and in all probability turns it on its rim. It is said to be the mass of 4.3 million Suns. If you’re trying to imagine how massive that is, don’t even try. It’s not humanly possible. Let’s just call it ‘super massive’ and get it over with.

The echo of the Big Bang

In 2001, analysis of cosmic microwaves revealed that some of them have been hanging around in the air like static all these billions of years, all the way back to the big bang. These not only settled the ‘big bang debate’ once and for all, it gave us a fairly accurate method for dating the universe and learning its true composition. It was found that most of the mass in the universe is not visible mass, and is made up of dark energy and dark matter. As for the age, our universe is a mere 14 billion years old. Still in its early youth, we fancy.
‘Are we alone in the universe?’ is a question that most of us have. Discoveries like these may not give us answers straight away, but the tunnel of darkness is lighting up, one tiny speck at a time. That day may not be far when we can find a planet like our own in a distant Solar System which supports intelligent life. Until then, we must continue looking.