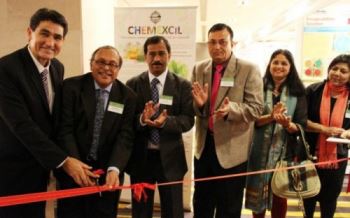 Top chemical corporations from Australia partnered with their Indian counterparts at the Indian Chemicals & Cosmetics Exhibition held over 24th and 25th September at the Hilton, Sydney.

A returning delegation from India, the exhibition saw a tremendous response in participation from both countries. Hosted by Chemexcil and Inaugurated by Mr. Arun Kumar Goel, Consul General of India, Sydney and Dr. Geoff Lee, Member of Parliament, Parramatta, the event was a key milestone in furthering bilateral relations between India and Australia.

The opening ceremony was introduced by the AIBC NSW, President, Ms. Sheba Nandkeolyar who stressed the growing importance of the Australia-India relationship in the Asian Century.

In his speech, Mr. S. G. Bharadi, the Acting Executive Director of Chemexcil, Mumbai, explained that the exhibition was geared towards strengthening and expanding existing businesses, promoting India’s chemical export products as well as building a positive brand image of products that would bring about other joint ventures and technology transfer between Australia and India.

Mr. Arun Kumar Goel, Consul General of India and Chief Guest at the ceremony, spoke about how the bilateral trade has grown, India being the 4th largest partner for Australia. He also mentioned that this delegation will further strengthen the bi-lateral partnership.

Dr. Geoff Lee, Member of Parliament, Parramatta and Guest of Honour, threw light on the NSW-India perspective. He said, “The trade relations between NSW and India are growing and defining the future of the Australia-India relationship. NSW Premier, Hon Barry O’Farrell’s commitment to this future is driven by his visiting India every year to ensure the advancement of these bilateral relations.”

Mr. Bhupendra Patel, Regional Chairman, Chemexcil was pleased to see the list of confirmed buyers who were planning to visit the exhibition.

The business success of the event was encapsulated by Mr. Roger W. Read, President NSW, Royal Australian Chemical Institute. He said, “What an excellent platform, a very well-organised meet, got a chance to understand the capabilities of the Indian Chemical Industry. All the exhibitors were very professional and well-informed.” He also added that he would like to see an even bigger delegation covering a larger number of industries in the future.

The exhibition was organised by CHEMEXCIL – Chemical Export Promotion Council, set up in 1963 under the aegis of the Ministry of Commerce & Industry, Government of India. CHEMEXCIL plays a key role to create a favourable environment to augment exports and acts as one point source of information for sourcing a variety of specialty chemicals covering basic organic & inorganic chemicals, dyes & dye intermediaries, cosmetics, toiletries & essential oils and castor oils from India. The Australia exhibition was handled by MultiConnexions – a full service award winning agency specialising in multicultural marketing, advertising and communications.

Vodafone customers are set to benefit from a 130 billion US dollar deals between US-giant mobile company Verizon & the...