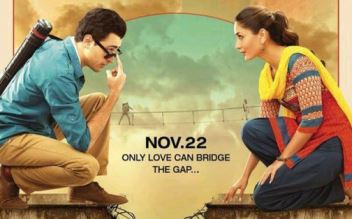 Gori tere pyaar mein is a 2013 Indian comedy and romantic movie which has acquired ratings of 4.6/10 on IMDB. This movie is directed and co-written by Punit Malhotra. It was released on November 22, 2013 and although the story was really good and unique, the film didn’t prove to be a hit on Box office. Up until know, it falls into average category with only $2-$3 million grossing across the country. It starts biggest actors of Bollywood including Imran Khan, Kareena Kapoor and Shradda Kapoor. It also includes an item number of Isha Gupta which originally credited Nargis Fakhri.
The story of this movie revolves around a boy Rahul who has returned to his hometown after studying in US and due obvious reasons, his father is always complaining about his behavior and no interest in the family business. As Rahul agrees to get marry with a girl Shabbu, that his family chose for him and when he has a moment alone with the girl in her house, he finds out that she already loves someone else and doesn’t want to get married. Later they both become good friends and then over lunch, Rahul tells her about his love story, crisis and the way it ends. Shabbu realizes that he is still in love with his ex-girlfriend Dia. On the day they are getting married, she convinces him to stop the wedding and go find his love. On doing so, he finds out that she is currently living in a remote area for welfare purposes. He goes to meet her and with number of conflicts, convinces her that she will leave with him as soon as he builds a bridge for villagers. There are some fights, disappointments and hard work but at last the bridge is complete and now it’s time for these love birds to go home.