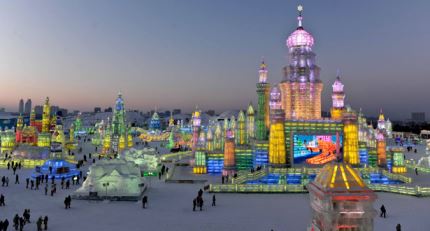 In the provincial town of Harbin in China, every year around December, the ice and snow that falls during the winter transform into beautiful sculptures that have been attracting as many as 15 million visitors annually. In this piece, we tell you a little more about the world’s biggest winter festival.

To the very northeast of China, there is a small province by name Harbin. In this province, every year, during the three months from December to February, the people celebrate Earth’s biggest winter festival bar none. It’s called the Ice and Snow Sculpture Festival, and over the last seventeen years during which it has been organised, it has become Harbin’s number one tourist highlight.

Here are a few things you did not know about this festival.

1. The festival attracts 10 to 15 million visitors annually. It is the world’s biggest ice sculpture festival, covering an area of 600,000 square meters. It boasts of the tallest ice edifices in the world – the tallest ones reaching heights of 46 meters – and employs about 10,000 workers to haul and cut blocks of ice and convert them into life-like idols.

2. Many other winter places such as Sapporo, Norway and Quebec have ice festivals of their own, but what sets apart the Harbin festival is its sheer size and scale of the sculptures, not to mention the beautiful lighting.

3. At first, this used to be a national festival, but as it grows in international stature and as China’s economy grows, the size of the snow and ice sculptures keeps growing. Computer controlled LED devices and regular lighting combine to give rise to beautiful displays of light and colour that gives Harbin its very own distinctive signature.

4. The 2016 iteration of the festival began on December 21, 2015 and is due to finish sometime in February. It’s still on, so if you’re around China or if you can go there on short notice, pack your bags right now!

5. There are three venues that make up the festival: Sun Island Scenic Area, Ice and Snow World and Zhaolin Park. The last place has more than 1000 ice sculptures like internally illuminated ice lanterns, magical figures and animals that are loved by animals. There are also ice slides that are loved by kids of all ages.

6. There are plenty of flights from Beijing to Harbin from early in the morning to late at night. It takes about three hours to get to the Ice Festival sites, including the flight to Taiping International Airport (two hours) and taxi to the sites (one hour). A return flight is about 1000 Yuan (160 USD).

7. The weather at this time of the year in Harbin is cold and dry, so make sure you pack plenty of warm clothing and sunglasses. When you’re there, make sure you keep your fluid intake up all day (because the humidity level there is just 2%), and keep rubbing your hands and feet throughout in order to prevent frostbite from catching.