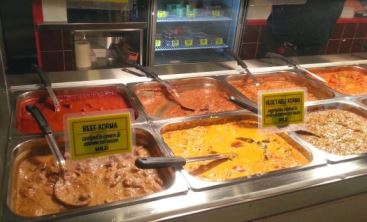 “Indian curry, makes Aussies worry”!
The most clichéd cricket banner I have seen during any Indo Aussies cricket matches is this one. “Indian curry, makes Aussies worry”. Before India became Cricket Central and the powerhouse juggernaut it is today, the subcontinent was considered a tough place to tour Australian and other foreign teams, mainly owing to the spicy curries making the boys from Down Under feel the thunder right ‘down under’. If rumour mills could be believed undue credit is given to Gandhi and the freedom fighters, as it was the hot chili stuff that made the Poms think it’s not worth the trouble and leave India for good. Nonviolence! My foot. Spice folklore has this juicy story: The East India Company top brass was invited by one of the Maharajahs of India fo

r a sumptuous dinner. (Needless to mention, but read spicy whenever food is mentioned in Indian context). After the dinner, the hapless guest, had to spend a considerable time in the grand toilet of the Maharaja. He made a startling discovery and shared those words of wisdom to his visibly worried wife which now has become immortal. Here is the English gentleman’s whose bowels got clean bowled, famous quip in verbatim.” Now I know my dear, why these Indians (swear words edited) use water in the lavatory instead of toilet paper. Because toilet paper may catch fire”. So we won the Spice war and independence from the Brits, because of our spiciness mainly.
India is famous for many things. Spices top that pretty long list. One of the reasons India became a hot magnet for all the European Seafarers, were the quest for the spices. Americans should be thanking Indians and their spices. They exist actually due to the GPS malfunctioning on Santa Maria, the Columbus’s ship, in the 15th century or some of those crew might had cock eye while reading the maps. You don’t need a degree in Cartography to know which way is East, for heaven’s sake. No one, especially when you are desperately in need of Spices and you have two countries and their royalty sponsoring your trip, an entire continent of Europe rooting for you and supposedly the best sea navigators on board. And the bottom line of this most famous Spice journey ever is this; Not the discovery of India, the Spice kingdom, but exactly a place at the other end of the planet. One of the most prominent and successful country and continent were discovered, by an error. A correction in history though. History is actually based on whose version you are reading. I would go by the Indian’s version. No, not the brown ones, but the red Indians considering they were the original sons of the soil, the Aboriginals. Here is the Red Indian version of history. “Circa 1498. Tired, pale white skin drifting around and found in a lost state, dragged ashore”. So much for ‘discovering’ America. Yet, a great nation was born out of the “Spice Quest”. In the meanwhile, Columbus found a lot of Indians though, en route. He found Indians even in the Caribbean islands, and later rephrased them as West Indians once he realized his folly. Got to say it, East or West, Indians are the best, at least in Spices and migration.