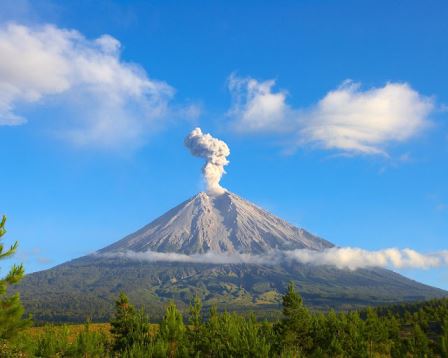 Western Indonesian authorities reported that the recent series of eruptions of Mount Sinabung have coaxed around 18,000 people to leave their homes and many more are now packing their belongings. Mount Sinabung erupted violently last weekend spewing out rocks and red hot gas over a wide radius forcing people in vicinities to vacate their homes for safer havens. Western Indonesian authorities have issued the highest order of safety alert especially in the island of Sumatra. The eruption has urged people residing in 5-km radius to leave their homes for safer places.
Furthermore, Mount Sinabung erupted six more times on Monday as people saw ashes spewing 2000 metres over the mountain. This was reported by spokesman of National Disaster Agency, Sutopo Purwo Nugroho following which the high alert order was announced. Ever since the alert has been lifted by the authorities, more and more people are vacating their homes with their family and livestock due to fear of ghastlier eruptions in the upcoming days.
But there are a few communities based within 5-km radius who are still residing even after repeated warnings. Mount Sinabung is considered amongst the most active of volcanic mountains in Indonesia and bestrides tectonic fault lines of high magnitude which are commonly referred to as “Rings of fire”.
In August 2013, following the eruption in the East Nusa Tenggara island, five people were reported dead. Mount Merapi located in Java province erupted many times in 2010 killing close to 350 people.
Other areas close to Mount Sinabung have also received warnings and people are now packing their belongings.