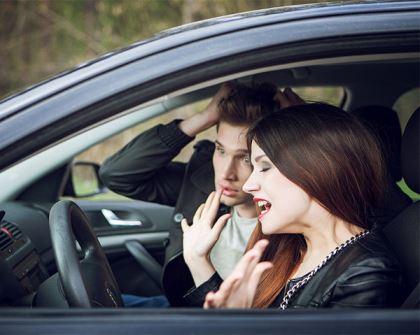 No one likes to fight, but arguments and disagreements are integral parts of every healthy relationship. Fights tend to develop during certain situations at certain places more than others. In this article, we tell you about them, and how to defuse the situation with minimal damage.

Some places and situations just ask for a fight between romantic partners. However, just because you’re in a conflict-prone situation doesn’t mean a conflict has to erupt. Here’s how you can handle them in a more mature, less violent manner.

Holidays are meant to be full of fun and frolic, but have you noticed how fights also magically tend to happen during holidays? This is because a break from routine, while it can be liberating, can also be stressful and require a bit of planning. Before you know it, something unforeseen happens – the flight is delayed, your partner has forgotten to pack a snack – and you begin to yell at each other.

In these times, it’s best not to play the blame game, and acknowledge your feelings to your partner and look for a solution together.

2. At a social gathering

Sometimes, in a social group, the guard comes down for a few minutes and couples can say snarky things about one another. This can happen due to unresolved issues during a past fight, or out of pure social pressure to be funny. Some people even prefer to rake up personal issues in public, thinking that being in a social situation will prevent the potential for backlash.

One way of dealing with this situation is when your partner says something sarcastic to you in a group, resist the urge to retort. Keep calm, remember the specifics, and bring it up later when you’re both alone with one another.

For some couples, being around in-laws is a lit fuse waiting to go off. Whether it is an over-protective father of your partner or an opinionated brother, sometimes things can get too claustrophobic when everyone is present under the same roof.

If you can escape to a private room of your own in the house, do so and have a talk. Allow the partner who is feeling under fire to speak. Listen as well as you can, and ask questions about his or her feelings. The more you listen, the better your partner will feel.