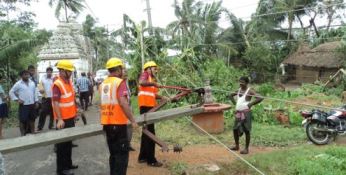 The amount of destruction has been enormous in some districts of Odisha which were hit by Cyclone Phailin over the weekend. The latest reports tell us that the aftermath of the cyclone has resulted in heavy rains over various districts which in turn, have resulted into flash floods. At present, around 2.5 Lakh people are stranded in Balasore district. Balasore and Mayurganj have been the two worst-hit districts. Even if the cyclone has left, yet mayhem has spread across almost all the districts of Odisha as people are left with very limited food and no shelter.
Reports tell us that the water of rivers Subarnarekha and Budhabalanga have inundated loads of villages especially in the Balasore district and relief measures are being established. Secondly, Badipada town based in Mayurbhanj has totally been submerged under water and the authorities fear an increasing rise in the levels of flood waters. Navy, Army and Air Force personnel have been deployed in order to conduct search-and-rescue operations across the worst-hit regions. Furthermore, the disaster management agencies of many states have come together to aid in the rescue operations.
S N Patro who serves the post of Revenue & Disaster Management Minister announced that food packets will be dropped immediately in the Balasore district as the situation and intensity of flood waters flowing through the region have reached an alarming scale.
The death toll at present stands at 27 people and the state department recording four more deaths today in the districts of Bhadrak and Mayurbhanj.