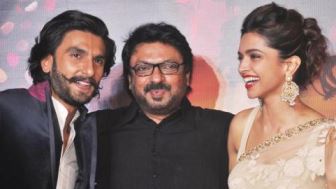 After a dry spell for almost two and a half years, it seems that filmmaker Sanjay Leela Bhansali is all set to make a comeback with his next film titled “Ram Leela”. The excitement level of Bhansali at present is really high and anticipation is building as the film nears its entry to the silver screen. But every filmmaker has to come across obstructions while making movies and it seems that there is some controversy brewing up regarding the movie. But regardless of that, Sanjay is immensely keen to present the movie to the people of the country as he positively feels that everyone will be able to relate to the plotline of the movie.
When faced with controversies, Sanjay Leela Bhansali calmly stated to the media that “However happy you are with it, finally it’s the film that people are going to see and judge. I am excited and dying to show this film to people.”
It is believed that Sanjay Leela Bhansali had trouble in making his presence felt in Bollywood lately but failed to make so, which is why he decided to work on something different this time. During the interview with Bhansali, the interviewer posed a few disturbing questions to Bhansali which he evaded smartly or diplomatically.
Furthermore, Sanjay Leela Bhansali spoke candidly about his perceptions regarding relationships. He said, “A relationship has to be given dignity whether you are in it or not.” Anyhow, most of the answers given by Bhansali during the interview were energetic and truthful.