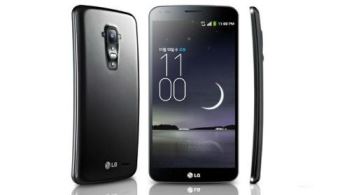 Curved displays and flexible top is the new arena for phone makers as the screens open up possibilities that could eventually transform the high-end Smartphone market.
After a long leaky build-up, LG has officially debuted its curvaceous Smartphone, the LG G Flex. The phone, which uses flexible OLED screen technology to allow for a dramatic curve on the horizontal axis, is between 7.9 and 8.7mm thick at various points, weighs 177g, and has a 6-inch 720p display. Inside there’s a 2.26GHz quad-core Snapdragon 800 processor, 2GB of RAM, a 13-megapixel camera, and developed what it said is the world’s first curved battery, with a capacity of 3,500 mAh.
Why Curve?? Curved smart phones provide a more comfortable grip than flat-screen models. A “dual window” mode to accomplish multitasking and a “swing lock screen” change the appearance of the handset’s lock according to the position of the user’s finger. Delivering analogy of handset’s feature to superhero’s ability to regenerate body parts, LG said its Smartphone will also have a “self-healing” scratch-resistant film applied to its back cover that the company promises will remove light scratches “within minutes.”
luckily / unluckily those outside South Korea will have a wait on their hands — although the G Flex is coming to all three major carriers in LG’s home nation next month, the company only teases an expansion into additional countries at some point in the undefined future. Taking a toll on the launch analysts say“LG’s curved G Flex phone, solves a problem that nobody had!!”