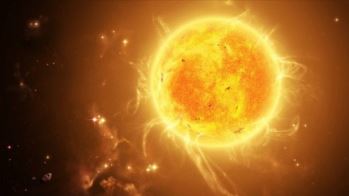 Will ISON shine “brighter even than the full moon??” The most prolific comet finder, the solar and hemispheric observatory, is dilemmatic about the aftermath of this sun grazer comet. Russian brothers Artyon Novichonok and Vitali Nevski had imaged this comet in September 2012 now fear its disintegration.
This was a solid puff of solar gases that begin to outgas as it reaches proximal to a sort of cloud of solar plasma known as the sun’s corona. Comets typically brighten as they get closer to the sun, crossing a temperature threshold that causes their icy surface to evaporate, depositing water vapour, other gases and dust in the air. Whereas, a light curve from this doomed comet is now showing no sign of brightness, as it races forwards. It is surviving the climax of its ordeal by fire and is believed to have evaporated in the sun’s atmosphere. It’s racing to a searing encounter with the sun’s perihelion but is about to break up, obeying the wake of other such comets in the past.
‘COMET OF THE CENTURY’ as it is termed, was expects of a great celestial show at the end of this year. So what makes a comet a showstopper? A lot depends on how much gas and dust is blasted off the central core of ice and rocks. The bigger the resulting cloud and tail, the more reflective the body may be.
But, this Christmas comet and the predictions of its catastrophic breakdown still interrogate the astrologers-WILL IT DAZZLE OR IT WILL FIZZLE…is a wait ‘n’ watch thing. (Just don’t believe anyone who tells you it’s a doomsday comet.)