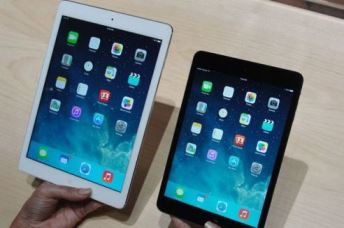 With today’s release of the iPad Air, you may find yourself wondering: Should you buy the iPad Air, or should you wait a few more weeks for the release of the iPad Mini with Retina display? After all, the Air is basically identical to the new Retina display Mini, except for a slightly larger screen. There are other differences, though, such as price, and probably CPU performance as well. If you’re trying to decide between the iPad Air and new iPad Mini with Retina display, read on to see how they compare.
The only notable difference, from a technical perspective, lies in the display. Both tablets use a 2048 by 1536 retina display, but the smaller size of the iPad mini’s screen means it contains more pixels per inch — 326 for the mini as compared to 264 for the Air. Both screens will look extremely sharp, but the iPad mini will deliver text and images that look even crisper than the iPad Air.
The only other noteworthy differences then are size and price. The iPad Air has been noticeably trimmed down since the fourth-generation iPad – it now measures 9.4 by 6.6 by 0.29 inches and weighs just 1 pound. The iPad mini, on the other hand, measures 7.87 by 5.3 by 0.29 inches and weighs 0.73 pounds, making it the more portable of the two options. There’s a $100 price difference between the two tablets, which is considerable.
So which one should you buy? That’s a tough call. The fourth-generation iPad had a clear advantage over the original iPad mini, including a retina display and a faster processor. But now that Apple has closed that gap, I’m inclined to think the iPad mini is a better buy.