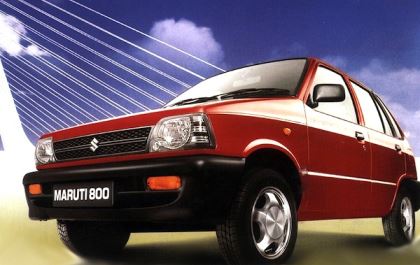 Maruti-Suzuki is a household name in India today as the leading manufacturer of cars. But a little less than thirty-five years ago, Suzuki was not even in the picture for designing India’s first ‘People’s Car’. Here is a quick summary of the Maruti 800 story, which started the era of dominance of Maruti-Suzuki in India.

It was the car that put India on wheels. In the seventies and the eighties, the automobile of choice for most Indians was the trustworthy scooter. Children of the eighties will still remember the old ads like ‘Hamara Bajaj’ which advertise the Bajaj Chetak. But then came the Maruti 800, inviting the two-wheeler-loving Indian to take a chance on a car that not overly expensive but terribly convenient for the whole family to move in.

Thus was born the Indian’s love affair with cars. Even to this day, buying a house and a car are the top two dreams of the average Indian.

The very beginning
The story began with a little 360cc two-cylinder car called Suzuki Fronte which participated in the 1969 Asia Highway Rally. It attracted the attention of Rahul and Sanjay Gandhi, then young men, who were looking to launch the ‘People’s Car’ of India. When they drove around in the Fronte, they were impressed, and they sent a message to Suzuki requesting for an offer to collaborate on an Indian car.

Unfortunately, the situation surrounding Suzuki at that time was so bad that they could not accept the offer.

Entry in 1978
Nine years later, in 1978, with Osamu Suzuki at the helm of affairs, a new car was developed called the Alto in Japan, which became the company’s staple car for decades. Suzuki’s growth trajectory was kickstarted with the Alto, and in many ways it became the car that represented the average Japanese person. So when one of Suzuki’s engineers read in India Today that the government was inviting car manufacturers to manufacture a small car for India, they applied to the Indian embassy and a new partnership was born.

Difficulties
The path was by no means a straight one. First, the application was made after the due date, so the Indian Embassy rejected it. But after many twists and turns, and after the pulling out of big names such as Volkswagen Daihatsu in the last minute, Suzuki was chosen as the last resort of Maruti. Also, Osamu Suzuki saw unlimited potential in India much before anyone else did. Since SMC was still a small auto manufacturer in Japan, a good performance in India was going to consolidate their position as a major player.

Transfer of control
The engineers and management at Maruti Udyog Ltd were novices in car making. So they ceded control to Osamu and allowed him to set up engineering and management processes that put strict controls on finances so that a small-margin, small-priced car could be brought out. Thus came the Maruti 800, which now masquerades on Indian roads as Maruti Alto. Not only is the massive economy of scale to credit for this, but also Osamu Suzuki’s legendary cost-cutting and frugal processes.