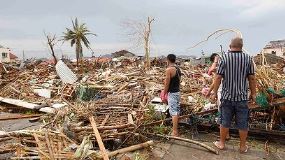 You can’t stop them. The only way you can survive is getting out of its way. The Philippines has a regular dosage of typhoons, earthquakes, volcanic eruptions and other disasters because it is located on the so called “Ring of Fire” of the vast Pacific ocean where numerous underwater earthquakes and volcanic explosion occur.
Typhoon Haiyan killed thousands and rendered more than hundred thousand people homeless in Tacloban, Philippines. The authorities fear that the death toll might be around ten thousand, which could make Haiyan one of the most devastating typhoon in the history. Eyewitnesses said that the waves were at least 6 meters (15 ft) tall and it looked like a tsunami.
There were also a few incidents of looting in the business establishment and malls. People are getting violent due to scarcity of food and rescue efforts. The government has deployed police and soldiers at different places to control the disturbed population and trying to figure out the best way to tackle this situation, but they are clueless because of the sheer magnitude of the damage.
A lot of towns have been affected, thousands of people are missing and around 70% of the buildings were destroyed. The US Defense Secretary Chuck Hagel had approved the request for military aid from the Philipines. The European Commission has sanctioned 3 million euros for rescue and rehabilitation efforts.
As the typhoon is headed towards Vietnam, the government had already evacuated more that 6,00,000 people from the coastal areas to a safer zone with enough food and necessities for 3 days.