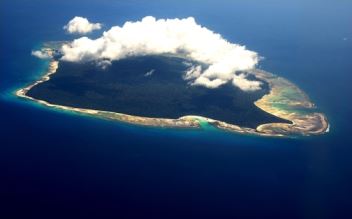 There is a place on earth that has been supporting a population of humans for thousands of years but has never been contacted by the outside world. This is the most isolated place on earth which despite being very close to the modern civilization geographically, manages to stay aloof and has kept all attempts of making contact at bay.
The North Sentinel Island is one of the many belonging to the Andaman and Nicobar Islands of India in the Bay of Bengal. The Andaman and Nicobar Islands is a busy tourist destination for India however this particular island inhabits a tribe that has been confined to this place for about 60,000 years. They are said to have been descended from early humans from Africa. The tribe lives a peaceful life in the dense forests of the island which is about 72 square kilometers in area. The thick foliage makes it difficult to even get an idea about their daily life from satellite images. The tribe keeps its existence and numbers a closely guarded secret and many attempts at getting to know them have failed miserably.
Many explorers have tried to unfold the secret life of this isolated island and bring it to the modern world however the ferocious men of the island do not spare anyone who tries to get close and attack them with bows, arrows and other primitive weapons. The most successful and peaceful attempt towards getting to know these people was made by an Indian anthropologist and director of the Anthropological Survey of India Mr. Trilokinath Pandit. The British also tried to colonize this island along with Andaman and Nicobar and made some forced contact attempts. In one of these attempts they managed to kidnap an elderly couple and bring them to Port Blair where they were supposed to be treated well and released to the island with gifts as a sign of goodwill. The couple soon became weak and died of diseases of the outside world never making it back to the island.
The Indian government has made it illegal to approach the island anymore. There is a strict 3 mile radius from the island that needn’t be crossed by anyone and is guarded by both sea and air patrols. Anyone caught trespassing can be sentenced to prison along with fines if they are not killed first by the Sentinelese themselves.
What is also an unsolved mystery about this strange island is the fact that the Sentinelese managed to survive the tsunami that hit the Indian Ocean a few years back. Where all other places affected by the tsunami had thousands of casualties, the Sentinelese did not suffer any damage. They were somehow prepared to face a calamity of that scale and took precautions beforehand. No one knows for sure however, what they did to save themselves. They also refused to accept food packets dropped for help by the Indian navy and warded off the helicopters by shooting arrows at them, showing clearly that they are better off on their own!