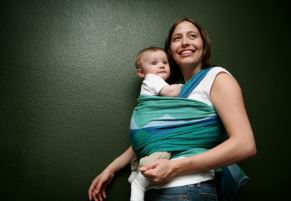 Placing your baby in a stroller or a pram may be the easy way out, but wearing your baby could have untold benefits for both. In this article, we take a brief look at the history of babywearing, before diving into some advantages of this age-old practice.

Babywearing – the new, fashionable word for carrying one’s baby – is certainly not a new trend. Human mothers have been carrying their babies in their arms for thousands of years. In fact, human infants are equipped with an adaptation to hold on to the body hair of their mothers. It is called the grasping reflex. You can try this on any infant by placing your finger on their palm. The infant will immediately close its fist and hold on.

Long after human beings lost most of their body hair, this reflex persists. With the arrival of economic liberation and prams, though, babywearing has become a lost art. Mothers now buy an artificial carrier for their babies as early as they can, to relieve themselves of the troubles associated with carrying them in their own arms.

But babywearing has its own set of benefits. Here are a few.

Human babies are among the least neurologically developed of all primates at birth. Throughout the first three months after birth – often called the ‘fourth trimester’ – a baby needs near-constant intense nurturing, frequent breastfeeding and a need to be held all the time. Babywearing supports all of these needs without requiring the mother to forego her other responsibilities.

Carrying babies has often been associated with reduced amount of crying. The gentle movement, warmth of the mother’s body, proximity to the mother, and the upright position naturally soothes and settles the child’s nerves. Babies worn in a carrier tied around the body have been proven to sleep longer, as the rocking motion of the mother’s body helps settle them into the next sleep cycle.

3. It can be done by anybody

Babywearing can be used as a means to bond with the baby, and it can be done by anyone, not just the mother. Fathers, grandparents and aunts can use this as a great reason to bond with the baby. A person who carries a baby is more likely to touch, kiss and stroke it than a person who wheels it around in a pram. In return, the baby gets to know more about the carrier by gazing, smelling and touching. In this way, wearing a baby can be a great way to bond with it, both for mothers and other loved ones.

When the baby is carried at chest-level, she will see more interesting things happening all around her rather than the ‘legs and feet’ view she will get from a pram. Adults interact more with a baby in a carried position, pointing out what they see and having more conversations. Babies that are able to talk also are benefited by this position because the adult’s ears are close, and eye contact is easily made.