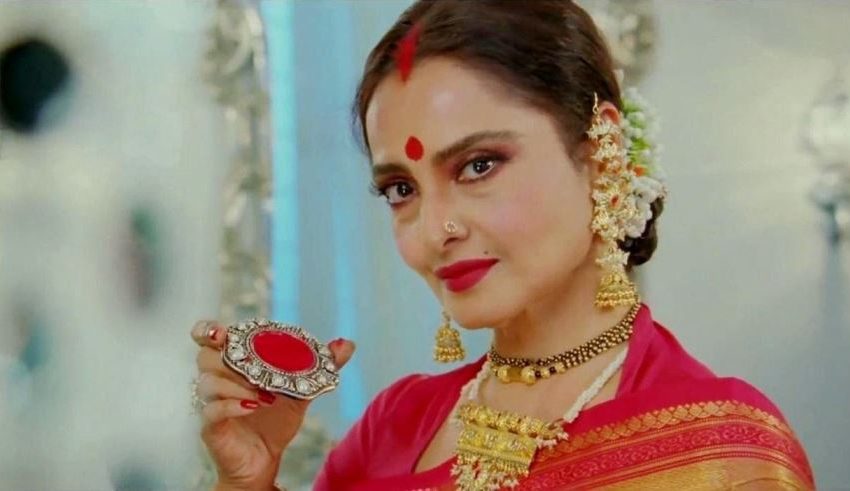 Is there anyone who grew up during the golden era of Bollywood who did not have a crush on Rekha? Whether you’re male or female, you had to admire this beautiful diva who left broken hearts in her wake everywhere she went. In this piece, we give you a list of five of her iconic Bollywood roles.

Rekha is the quintessential Bollywood diva. Whether it is seductive beauty or innocent charm, a femme fatale or a village belle, she has done numerous roles in just about every role that you can imagine, and she has stolen the hearts of many while doing so. She has turned 61 in 2015, and yet she maintains her hold on the flutters of young men and women alike who look up to her as an epitome of beauty.

Here are a few roles in Bollywood movies that earned Rekha her fame.

1. Umrao Jaan (1981)
A film adaptation of the Urdu novel, ‘Umrao Jaan Ada’, written by Mirza Hadi Ruswa, Umrao Jaan told the story of a courtesan and poetess based in 19th Century Lucknow. This is easily the most popular of Rekha’s roles, for which she undertook training to learn the finer nuances of Urdu. Her performance was universally praised, and she even won the National Film Award for it.

2. Silsila (1981)
Also another of her scintillating performances, this movie made headlines because it was rumoured that the three actors who played the three main lead roles were actually involved in a love triangle in their real lives. That angle gave the movie all the juice it needed to become a runaway hit. Rekha’s restrained, angelic performance as the ‘other woman’ while looking like a million bucks only added fuel to the fire that was the rumour mill of those days.

3. Khoobsurat (1980)
Before the successes of Umrao Jaan and Silila came her career-defining role as the bubbly and vivacious Manju in Hrishikesh Mukherjee’s directorial venture, Khoobsurat. It was this movie that established Rekha as an actress all mainstream directors wanted to cast. Offers for Umrao Jaan and Silsila came on the heels of Khoobsurat’s success.

4. Ghar (1978)
A Gulzar movie on a severely dark subject – how a married couple deal with and overcome the shadow of rape – should have brought Rekha more accolades than it did. But Indian society of the late seventies was probably not ready for a movie of such gravitas, and many of Rekha’s admirers perhaps did not appreciate her breathtaking performance of a woman who survives rape with dignity and power.

5. Muqaddar ka Sikandar (1978)
Perhaps the role that gave the casting directors of Umrao Jaan confidence that Rekha can pull off a courtesan’s look with ease, in this movie she plays Zohra Bai, the selfless lover of Sikandar, played by Amitabh Bachchan. Incidentally, along with Mr Natwarlal, a 1979 movie in which she worked again with Bachchan senior, this is the movie in which they reportedly hit it off so well that people started to take notice of their off-screen chemistry.