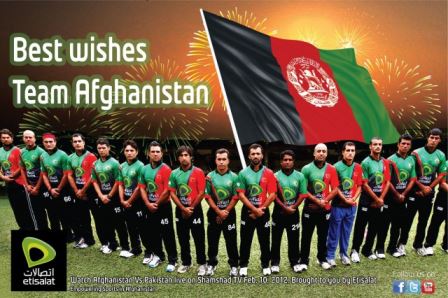 For the first time, Afghanistan goes for the World Cup finishing a great journey playing cricket in refugee camps to playing cricket with world’s most competent players.

After beating Kenya for only 93 in 44th over in the Sarjah Cricket Ground, the Afghani team got to their target in 21st over.
Afghanistan is going to play cricket in Pool A in the World Cup 2015 with co-hosts New Zealand, Australia, England, Bangladesh and other qualifiers.
UAE, Netherlands, Kenya, Scotland, Namibia, Uganda, Canada, Nepal, HongKong and Papua New Guinea are now going to fight for the final 2 berths of World Cup during the last qualifying event held in New Zealand in 2014.
Afghanistan was already anxious to beat Kenyan team in the final match of a 2-year qualifying competition.
The Twenty-Twenty International of Monday, Afghanistan routed African side by as many as 106 runs and then carried that from through to Wednesday as they gained victory by 8 wickets in first 2 determining ODIs.
Then, Afghanistan beat Kenya for only 89 and reached their goal in 18 overs.
Kenya, on Friday, started batting and struggling with Morris Ouma scoring 39.
Pakep Patel was another batsman who reached double figures in the innings in which the 1st boundary arrived after 16th over.
Slow left armer Hamza Hotak is the leading bowler of Afghani team. He claimed 3-19 in 10 overs.