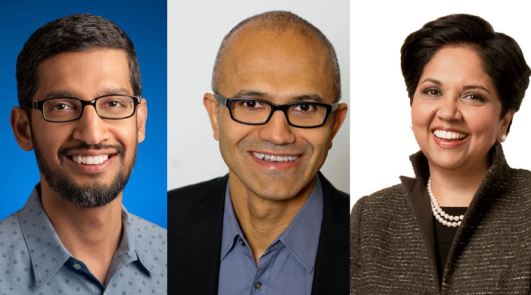 At the time of this writing, three large global companies in the United States are headed by Indian CEOs. First- and second-generation Indians are moving up the ranks in corporate America, and are proving themselves as worthy players on the world stage. Here we profile three people making the biggest waves.

It seems that the age of the Indian CEO is amongst us. Indian culture places an extremely high value on education, and Indians have often been described as conscientious workers by employers in the West. Now, it appears as though Indians are taking a further step and adding the arrow of leadership to their quiver. In this article, we offer quick profiles of three CEOs of Indian origin at the helm of some of the biggest companies in the world.

Satya Nadella at Microsoft
Born into a Telugu speaking family in Hyderabad in 1967, Nadella attended Hyderabad Public School in Begumpet before attaining a Bachelor’s degree in electrical engineering at Manipal Institute of Technology in Karnataka. He then moved to the US for a masters degree in computer science at the University of Wisconsin, receiving his degree in 1990. On 4th February, 2014, he succeeded Steve Ballmer as the CEO of Microsoft Corporation. Before he was made CEO, he was Executive Vice President of Microsoft’s Cloud and Enterprise group, responsible for building and running the company’s Computing Platforms, Developer Tools and Cloud Computing Services.

Sundar Pichai at Google
On August 10, 2015, Sundar Pichai was announced as the next CEO at Google. The internet giant unveiled a new corporate structure creating an umbrella company named Alphabet. Pichai will oversee the biggest company under that umbrella, which will include some of Google’s best-known products, like search engine, ads, maps, apps, Youtube and the Android system.

Alphabet will be run by Larry Page, who said that having Sundar take over Google’s primary functions will free up time for him to scale Google’s future aspirations.

Pichai was born in Madras, India, in 1972, into a Tamil family. He completed high school at Jawahar Vidyalaya school located in Ashok Nagar, Chennai, and completed his junior college from Vana Vani school in the IIT Madras campus. He earned his metallurgical engineering degree from IIT Kharagpur, and then went on to pursue MS and MBA degrees in the United States. He began working for Google in the year 2004.

Indra Nooyi at Pepsico
Nooyi joined PepsiCo in 1994 and was named president and CFO in 2001. In 2014, she was ranked 13 in the list of Forbes World’s 100 Most Powerful Women. In 2011, she became the CEO of Pepsico, and her strategic direction of her company has been largely successful. She reclassified Pepsico’s offerings into three categories: fun for you (potato chips and soda), better for you (diet and low-fat versions) and good for you (items such as oatmeal).

She was born into a Tamil-speaking family in Madras in 1955. She received her bachelor’s degree in physics, chemistry and mathematics from Madras Christian College in 1974 and a Post Graduate Diploma in Management from IIM Calcutta in 1976. She then earned a master’s degree in Public and Private Management in 1978 from Yale.