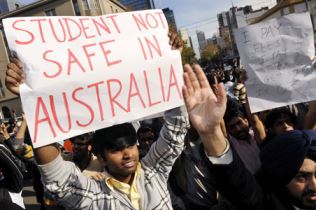 Following the horrific attack on Indian student Manrajwinder Singh, the reputation of Melbourne as a hub for Indian students has gone down to a great extent. Mr. Singh was beaten black and blue at Birrarung Marr by a gang of hooligans who left him in an unconscious state and robbed him off his belongings as well. According to reports, he was on his way back from Crown casino around 4:15 am in the morning when the attack happened.
Police are on the lookout for eight men who are of African origin. At a recently held court appearance, one of the accused who was a 17-years-old revealed that he hailed from a gang which went by the name of KYR (Kill your rivals). This particular gang primarily targeted students who travel to Australia from countries like India and other developing nations.
Manrajwinder is presently undergoing treatment and is said to be in a critical condition in The Alfred Hospital.