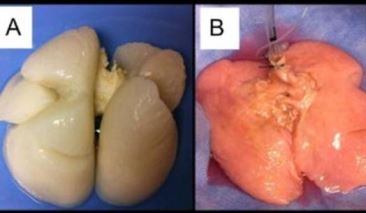 Shortage of organ donors might soon be a thing of the past! US Scientists have successfully developed human lungs in a lab as a part of an advanced

regenerative medicine project. It might sound like a part of a crazy sci-fi movie, but medical researchers are trying their best to accomplish this task since each year, several people die waiting to undergo organ transplant surgeries.
How they did it?
The researchers used a damaged lung to create a synthetic lung. They removed all the tissues surrounding the organ until the skeleton of the lung was the only thing left behind. They then added fresh cells from another lung, which was not suitable for transplant but still had some effective cells in it. This artificial structure was then immersed in a life-supporting liquid, filled with nutrients and after about four weeks, an engineered human lung was ready to give someone, a new breath of life.
This new lung looks like the real lungs, except its pinker, softer and less dense. Researchers are hopeful that in another 10-12 years they’ll be able to use lab-grown organs for transplants.