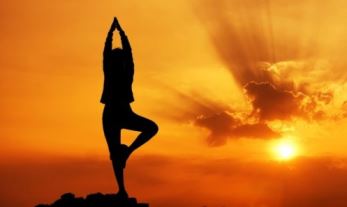 People have called Yoga India’s gift to the world. In its current form, especially in the West, it is used chiefly as an exercise program to limber up muscles and increase core strength and flexibility.
But yoga has a spiritual component to it too. In fact, the word ‘yoga’ in Sanskrit means ‘to unite’ or ‘to join’, and it signifies the union of the spiritual and the physical planes. The Mahabharata, the great Indian epic, defines the purpose of yoga as the experience of union with Atman or Brahman, the Supreme power pervading all things, both living and non-living.
The origins of yoga can be traced back to the time of the Indus Valley Civilization, dating back to mid third millennium BCE. Figures depicting yogic positions have been found on seals, coins and temples amid the ruins, prompting scholars to speculate whether the people of the Indus Valley practiced an early form of yoga in their daily lives.
Studies of early vedic texts like the Rig Veda have revealed that yoga was considered a way to curb the senses and increase the intelligence of the inner mind. The bodily positions prescribed by the practice enabled the seer to achieve control over their minds. Sages of those times believed that if one achieved control over the process of breathing, one achieved control over their bodies, and therefore took the first steps towards contemplation, understanding, and finally, union with the universe.
The Bhagavad Gita mentions three forms of yoga: Karma yoga, the yoga of action; Bhakti yoga, the yoga of devotion, and Jnana yoga, the yoga of knowledge. It defines yoga as a state of equanimity of the mind where an individual is neither attached to success nor to failure but is only concerned with performing his duty.
No matter what the source, the underlying message of yoga seems to be that of contemplation, of being aware of the bigger picture of creation and our tiny parts in it, of understanding our duties, of being courageous enough to carry them out with conviction, and of attaining the wisdom to detach ourselves from results that are out of our control.