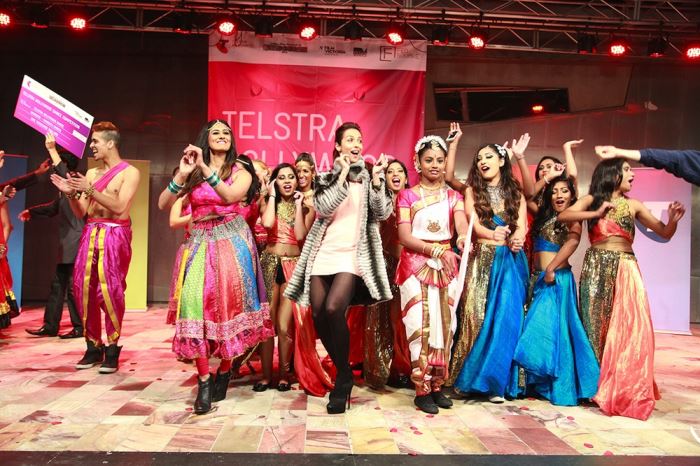 The annual Telstra Bollywood Dance Competition is one of the highlights of the Indian Film Festival and attracted thousands to the Federation Square in Melbourne on 4 May.
Over twenty talented contestants from all over Australia competed for the winning titles with Bollywood’s brightest stars Malaika Arora Khan from India’s Got Talent, Dhoom 3 Director Vijay Acharya and Producer Avtar Panesar there to judge the competition.
All judges were very impressed with the event. Malaika encouraged the audience for a round of applause for all the dancers and said “It takes a lot of courage to come up on the stage and perform in front of so many people, but what I saw today in terms of dancing, technique, costume and selection of music was all fantastic.”
The contestants belonged to all age-groups and showcased various Indian dance forms including traditional Indian dances like Bharatnatyam to contemporary and hip-hop dance styles.
The crowd entered into the Telstra ‘VIP’ SMS draw to win access to Telstra’s VIP area. The lucky winners enjoyed red-carpet treatment with refreshments, VIP seating near the stage and a Telstra gift bag. Telstra SMS voting also gave the audience the chance to vote for their favourite dancers.
Alister Park, Telstra Marketing General Manager said “we’re thrilled to host a bigger and better Telstra Bollywood Dance Competition this year after a highly successful 2013 competition. At Telstra we’re very proud of our connection to the South Asian community and we look forward to bringing even more signature experiences like this together for everyone to enjoy.
“It’s great to know that people not only got to see their friends and families perform but also had the opportunity to get close to some of their favourite Bollywood stars” Mr Park said.
Throughout the day visitors made their way to the Telstra stand where they could capture their own Bollywood photo moment with a life-size cutout of Malaika Arora Khan or enter questions for their favourite Bollywood judges at the drop-box.
The judges were excited to see their fan following in Melbourne and readily answered questions from an ecstatic crowd. While everyone quizzed Malaika about her diva status and her exciting life, the Dhoom 3 director producer team gave the crowd the inside scoop that a Dhoom 4 might be in the making!
The event was attended by the who’s who of the South Asian community in Melbourne including media and community leaders. Telstra awarded each winning group a prize of $1000.
Sanjana Jaiswal won the Telstra Bollywood Dance competition under 12 category while both Shiamak Davar and Sapphire group won the adult category in a tie. Over three and half thousand SMS votes were received from the audience on the day for the People’s Choice Award, which went to Bollywood Dimensions.
The Telstra Bollywood Dance competition was a wonderful Bollywood experience for the entire community, showcasing plenty of color and many of Australia’s most talented dancers.