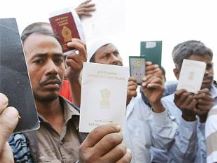 As per the new labour policy of Saudi Arabia against illegal foreigners, a total of 1.34 Lakh Indian employees who were working in the country have now packed their bags for home. The government of India is keeping a close watch on the situation as has been revealed by Overseas Indian Minister Vayalar Ravi. As per the new policy named “Nitaqat”, all those foreigners who do not have a correct residency and labour status are being forcefully deported but as of now, no harassment incident against an Indian national has been brought into account as such.
Vayalar Ravi further highlighted the fact that the government of Saudi Arabia as specifically instructed that the people are not to be harassed by entering their homes. The checking has to be done in a proper way without offending any employee by any means and the whole process is said to be carried out in a peaceful manner. Furthermore, all those people from India who are not in a position to stay there are being assisted by the ministry. The embassies of both the countries are actively carrying out the process of deportation and many other associations have also been assisting the population.
No time limit has been fixed for the campaign as the government of Saudi Arabia started the deportation procedures after granting a grace period of seven months. It is being said that the nature of the campaign is becoming more active day by day as more Indians are assembling to be deported back to their homeland.