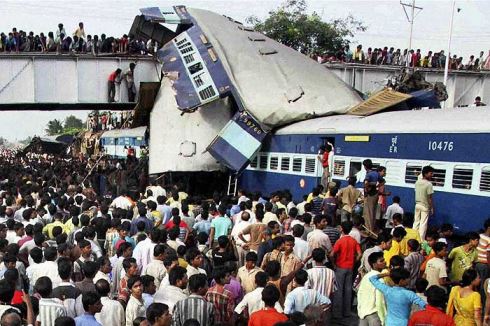 The recent Bihar train tragedy is yet another example of how mismanaged our Indian Railways are. After the mishap, every department responsible for the tragedy handled the situation like they have been doing from the last so many years – by blaming each other, without trying to find a radical solution. Indian Railways appointed a safety review committee in 2012 and as per their reports approximately 15,000 people lose their lives in rail accidents every year in the country. The figures are certainly shocking and can be described as an ‘annual massacre’.
Most of the accidents occur when people try to cross the tracks. On ‘Mumbai Local’ tracks alone, around 6,000 deaths were reported. The panel head, Anil Kakodkar said that reluctance of railways to own up to such a large number of casualties, by saying that railways is not responsible for these deaths, will not be tolerated anymore. The Bihar tragedy is being described by the railways as an ‘incident’ instead of ‘accident’ and this shows how they are trying to shun the responsibility off their shoulders.
Ideally, the local administration should be held responsible for not being able to alert the train about the huge rush of pilgrims but railways can’t deny the fact that they also failed to handle the crowd or to communicate with the train driver to slow down, in time. Travellers are forced to cross tracks because there aren’t sufficient pedestrian over-bridges and escalators. The platforms are narrow and the tracks require adequate barricading or fencing. Indian Railways’ failure to get rid of level crossings is another main reason behind the annual massacre. Railways still have around 31,000 level crossings, out of which 40 percent are unmanned. These unmanned crossings cause the most number of train accidents in India.