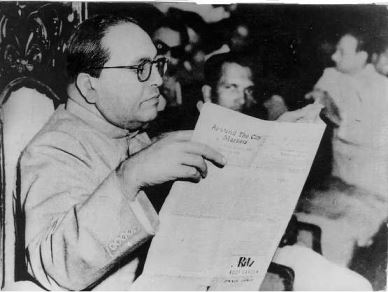 As we know, Australian-Indians have a double whammy on the 26th when they celebrate AustraliaDay and Indian Republic Day. The Indian Republic day marks the adoption of 448 articles as the Formal constitution. It took 2 years to build and was headed by the Chairman of drafting Committee -Dr B R Ambedkar.
Role of B.R. Ambedkar as India’s first law minister, Chairman of the Constitution Drafting Committee and as the man primarily responsible for writing the Indian Constitution is well known. Yet, there are many facets, contributions and lesser known facts about him. Babasaheb, as he was popularly known, was also a thinker, writer, orator, reformist, a scholar and a historian. He was one of the finest scholar turned political leaders of India. Probably, only a scholar of his stature can draft and write such an inclusive constitution. Unlike his contemporaries, he had no legacy in politics. It was absolute hard work and intellect that made him what he was. He proved that education truly liberates and empowers.
His writings and speeches have laid the foundation for a modern united India. He had a great flair for writing about many aspects of human life. While reviewing his published works, beginning from his dissertation for Master’s degree in administration and finance, followed by a book on Ancient Indian Commerce, and other writings of his life such as books, essays, treatises and monographs, it appears that he has written about many different facets of India as a nation.
While researching texts and literature written around his work, it has been observed that he evolved with time. This evolution has been from a firebrand, young leader who fought and worked for the rights of untouchable community to an educated social reformist. Was it because of early childhood experience as a member of the downtrodden dalitcommunity or was it to fulfil political ambitions and gain political power through mass popularity? His methods of working for the benefits of untouchables and gaining political power remained controversial. Perhaps he recognised the power of media much earlier and used his writings, speeches and weekly newspapers to create a momentum for a radical movement. He was well aware that it is the power and voice of united people, which can change things.
Dr Ambedkar was born in a Dalit community and hisjourney from the icon of dalits to a national hero witnessed many milestones. Some of his writings and speeches indicate that he fought only for the rights of untouchables and not for national good. There are many questions which are unanswered and need interpretations in different ways. ArunShourie’sbook, ‘Worshipping False Gods’ challenged Dr Ambedkar’s contribution to Indian Independence leading to controversies over his role in the nation’s independence movement. The book states-‘There is not one instance, not one single, solitary instance in which Ambedkar participated in any activity connected with that struggle to free the country’
Due to rising controversy, several Dalit organisations in Maharashtra want the book banned.
In recent past, B.R. Ambedkar was selected as the greatest Indian ever lived, after Mahatma Gandhi, in an independent opinion poll by media houses. As the saying goes, “Everything we hear is an opinion, not a fact. Everything we see is a perspective, not the truth”. There are many facts about Babasaheb which are unknown. Certainly controversies around his life will continue to shadow his contributions to the country. Whether Dr.Ambedkar was a leader of untouchables or particular castes or a national leader, who envisaged a modern India, will remain a debate. However, his dream of casteless society and a nation with modern democratic values has come true.