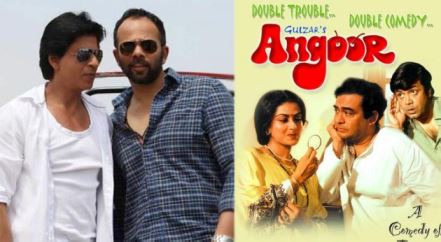 Rohit Shetty and Shah Rukh Khan, after the success of two ventures, Chennai Express and Dilwale, are set to remake a movie that is dear to many movie lovers’ hearts. The film in question is Angoor, the 1982 movie that is still considered a classic. We wonder whether this is a piece of news to rejoice at or be scared of.

Of the great parallel cinema successes of Bollywood, ask any cine buff which two movies rank right at the top and the answer comes pat: Hrishikesh Mukherjee’s Golmaal and Gulzar’s Angoor. These two movies bridged the gap between art house cinema and mainstream fare, cementing their places as all-time classics of the industry.

Now word has it that the classic movie, Angoor, itself a loose adaptation of Shakespeare’s ‘Comedy of Errors’, is about to be remade in the twenty-second century, armed with the glitz and glamour that has become the mainstay of Bollywood these days.

And who is going to direct this movie? No, not the likes of Neeraj Pandey or Anurag Kashyap, who would be this generation’s answer to yesteryear’s Gulzar, but the very unapologetic Rohit Shetty, he of the flying Sumos fame. After churning out mass entertainers like the Singham franchise, Chennai Express and Dilwale, he is now said to be training a serious eye on his pet project, the remake of Angoor.

The leading star for this movie – again, no surprises – will be Shah Rukh Khan. How he will sink into Sanjeev Kumar’s shoes will remain to be seen. The actor reprising Deven Verma’s beloved Bahadur is yet to be announced (though they say they know who it is going to be), and mystery still shrouds the identities of the actresses who will take up Moushumi Chatterjee and Deepti Naval’s roles.

What is also not clear is whether the director-star duo will remain true to the original movie’s earthy roots or whether they will blow up the budget and make it larger than life. Rohit Shetty may find it difficult otherwise to make a movie without blowing up a car or two, and SRK may yet miss his chocolate-boy grin and widespread arms. Who knows? Maybe they will find a way to bring all those elements into Angoor without ruining its essence.