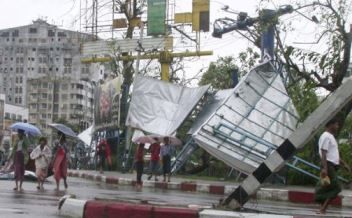 peed of about 200 kilometres per hour creating havoc across the nation. As of now, no major injuries have been reported and the casualties are quite low. Power was restored almost instantly to the main town named Neiafu. Communication lines are expected to be restored across other areas within a span of 24 hours. The deputy Prime Minister Mr. Samiu Kuita Vaipulu assured that there is no need for any outside assistance. Rescue aids from nations such as Australia and New Zealand are being kept on standby in case if another cyclone hits the island.
Tonga’s National Emergency Management office released a statement saying that they were fortunate enough to have escaped the worst of cyclones. The Fiji Meteorological group officials estimated that the cyclone would slam the coast of Fiji but with a much greater speed. The UN office for Humanitarian Services met on Thursday to discuss the preparedness strategies and also provide logistical aid if necessary.