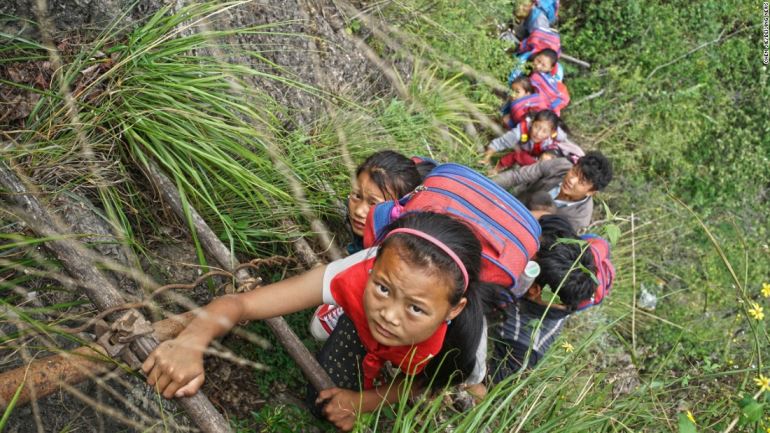 Atuler is a small village located on top of a steep, 800-metre-high mountain in the province of Sichuan, which is a part of the south-western China. The residents of this village are humble farmers, who do not have the resources to devise a safer way to connect with the rest of the world. They make use of wobbly wooden ladders to climb up and down the mountain without using safety measures of any kind. The worst part is, children from this village are forced to descend these ladders in order to reach school.

Recently, award-winning ace photographer, Chen Jie published photographs of these terrifying descents in a Beijing newspaper. In an interview Chen revealed that he himself made the deadly climb thrice during his visit to the village. He said he was shocked to see 15 kids in the age group of 6-15, descending the mountain carrying their backpacks. He said that the dangerous trek, which takes around 90 minutes to complete is not for the faint hearted.

Api Jiti, the village-chief told the media that there isn’t enough space on the top of the mountain to build a school for the children. Eight villagers have died and many others have suffered serious injuries while trying to scale the mountain. He also added that once he himself faced a near-death accident during a climb. Even the wooden ladders which they use for climbing down are as old as the village itself. This means, these ladders are more than a hundred years old.

Although, the villagers have adapted to their environment, it is still a dangerous task to be done every day. With the passage of time the trek has become so precarious that now children are forced to dwell inside the school premises and can visit their homes only twice in a month. After Chen Jie’s photographs were published, the concerned authorities faced a major criticism from the general public of China. They’ve promised to build a steel staircase to connect the village with the rest of the world as building a road is not feasible at the moment due to shortage of financial aid. And here I was worrying about working my way through the traffic tomorrow.