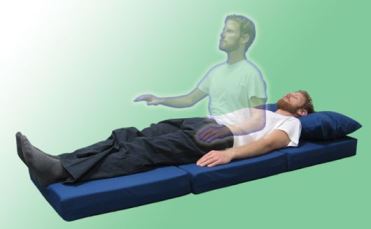 Death is one of those topics that we’re all aware of but never talk about. In many cultures, it is accepted blasphemy to speak of death as if it were objectively real. The vast majority of us believe there is some greater plane of existence beyond death, even though we behave as though we really don’t. Given this love-hate relationship that we have with death, and given how none of us are ever going to escape it – at least for the next six hundred years – it is worthwhile taking a look at how our brains react to the threat of impending death.
People who have had close brushes with fatal accidents often report experiences of extreme serenity, peace, warmth and security. They report stepping out of the their bodies and looking down at the corpse, and sightings of white tunnels of light and flying unicorns are not uncommon. Almost without exception, all these people who narrate these experiences say that they felt at peace, at one with the world. They are called Near Death Experiences.
Today we look at some real life Near Death Experiences and try to probe this mystery of death a little further.
Pam Reynolds
When Atlanta based singer and songwriter Pam Reynolds had to be operated on for her swollen blood vessel in the wall of her basilar artery, close to the brain stem, the temperature of her body had to be lowered to such an extent as to render her practically dead. Her brain would not function, but it would be fed with the absolute minimum amount of oxygen required to keep it alive.
During this procedure, Pam narrates that she popped out of her body and hovered on top of it as her doctor performed the operation on it. She moved towards a blinding flash of white light and entered the tunnel, only to see her deceased friends and relatives over there. But this brilliant burst of loving light disappeared abruptly, she says, and she was guided back to the operating table by her uncle, making her feel as though she ‘plunged into a pool of ice.’
Soon after that, she woke up and was wheeled into the recovery room. The operation was a success.
Elizabeth Taylor
Sometime in the fifties, Elizabeth Taylor had to undergo surgery, and because of complications that arose during the process, she was pronounced clinically dead for a period of five minutes or so. An eleven person team then worked on her and persuaded her back to life.
In these five minutes Elizabeth Taylor reported going through a blinding tunnel of light and of seeing Mike Todd, one of her (many) husbands, whom she referred to as the love of her life. She wished to stay with him, she said, but he ‘pushed her back to life’ because she still had ‘work left to do’.
‘I was pronounced dead once and actually saw the light,’ she said. ‘I find it very hard to talk about, actually, because it sounds so corny. It happened in the late ’50s, and I saw Mike. When I came to, there were about 11 people in the room. I’d been gone for about five minutes – they had given me up for dead and put my death notice on the wall.’
Anita Moorjani
Anita Moorjani, who has now made a career for herself as a speaker and writer on near death experiences, went into a coma which the doctors declared was fatal. She was not expected to make it beyond 36 hours because her organs had stopped functioning and her body had begun to swell up too. However, Anita reports having heard the conversation between her husband and the doctors, which was happening forty feet away from her down the hallway.
In her book, ‘Dying to be me’, Anita explains how she was presented with a choice whether to die or to return to life. If she chose life, she thought, her body would heal quickly and that she would get back to normal soon. This was when it was first brought home to her how illnesses begin at a psychical, energetic level before they become physical ailments. In her report she also makes the reference to a light of love.

Veronika Barthel
In 1981, Veronika Barthel was hit by lightening and was transported to hell, where creatures escorted her into big waiting rooms. She reports having seen a lake which made her think of an erupting volcano, and the air was filled, she says, with sounds of people screaming. Demons marched up and down like soldiers, and they looked more terrifying than any horror movie she had seen. People were thrown into caves, spears were being hurled at them as they screamed, and snakes slithered all over the ground, intimidating and scaring everyone.
Abruptly, though, Veronika found herself back in her car clutching the steering wheel. For a moment, she says that her hands looked as though they were on fire.
Whatever we do, death will claim us all. By examining near death experiences like these, we can hope to understand more about our brains are wired to deal with death. Perhaps at the very end, all of us will see blinding flashes of light and get engulfed in feeling good about ourselves. Maybe it’s our brain’s last ditch effort to make an unpleasant experience a bit less so, until we cross over.