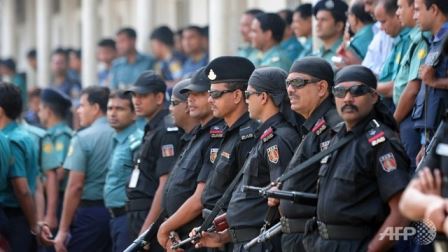 The judgment day was on. A Bangladeshi court announced the death penalty to 152 soldiers for the 2009 mutiny where they brutally killed 74 people including top ranked officers.  The judge, Mohammad Akhtaruzzaman, condemned the gruesome act of rage in which people including officers were massacred, beaten brutally, tortured, burnt alive and slashed to death before being dumped in filthy drains and sewers.
It all started on 25th February 2009, during the annual conference of the Bangladeshi Rifles (BDR) also known as the border force of Bangladesh. The BDR detained the people who were attending the conference inside a building, which included their commanding officers, Bangladesh army officers and civilians. They demanded for better pay, participation in lucrative UN peace missions, stable structure, no favoritism with regular army who get better pay and change in command.
The mutiny went on till 26th of February 2009 during which the BDR forces tortured and killed the hostages brutally. Finally after 33 hours of ordeal, the army tankers encircled them and few of them surrendered while many of them removed their uniforms and fled. The police found a mass grave in the building containing 74 bodies, which included the bodies of 57 top ranking and mid-ranking officers and the rest were civilians.
Judge Akhtaruzzaman said that some of the testimony from the eyewitnesses were sickening and completely inhuman. Another 350 soldiers from the 853 charged were given various jail sentences for their participation in the brutal mass murder in the name of the revolution.