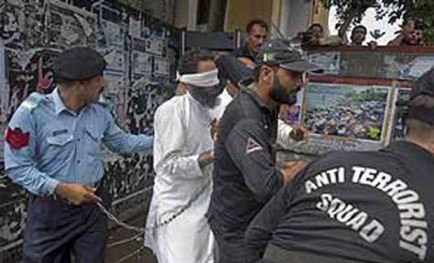 We’ve had stories like this before coming out of Islamic countries, but here’s one more. A Christian couple has been sentenced to death for sending a blasphemous text message allegedly insulting the Prophet Mohammed. Shafqat Emmannuel and Shagufta Kausar, a couple in their forties, belong to the town of Gojra, which has a long history of violence against Christians.
The defence lawyer tried to make a case that the couple had lost their cell phone a few days before the incident, so the message could not have been sent by Shafqat. The couple maintain that they did not send the message and that someone is implicating them to resolve a personal grouse.
Death sentencing because of insults to the Prophet is not an uncommon practice in Islamic law, which is very strict against defamation of Islam. As recently as March 27, another Christian man by name Sawan Masih was sentenced to death in Lahore for insulting the Prophet. Since the population is 97% Muslim, even unproven allegations and rumours tend to trigger violent responses.
For a neutral observer in a modern country used to the right to express his opinions, this may sound unjust and unfair. But before we leap into judgement, we must keep in mind that we’re all cut from the same cloth. Incidents such as these should remind us to be aware of ourselves, and to fight to keep our fundamental rights alive. Also, and perhaps more importantly, we must try and understand Islam better so that we could all work towards a more progressive future in which people can send text messages without fearing for their lives.